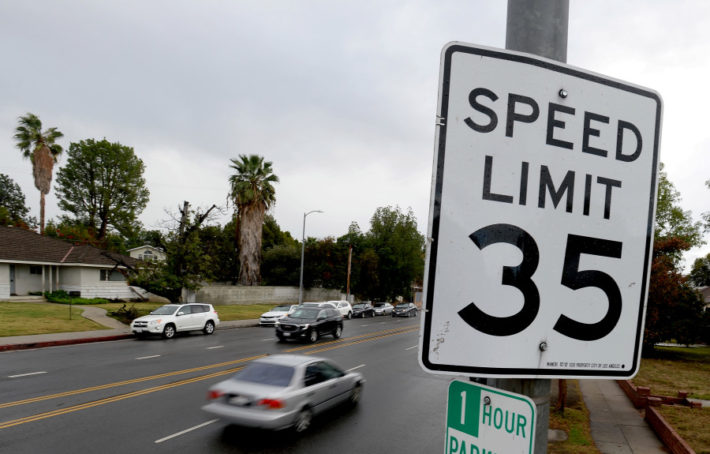 The Los Angeles City Council on Tuesday approved increased speed limits on dozens of streets in the San Fernando Valley, which will allow the city to begin actively enforcing speeding laws on those roads.

Just over 70 of the 100 total miles of increased speed limits approved are in the San Fernando Valley, including stretches of Reseda, Victory and Chandler boulevards.

The limits typically go up by five miles per hour, such as on Lindley Avenue, where the limit went from 35 mph to 40 mph. But others went up by 10 mph.

The council’s action aimed to resolve a years-long problem that has prevented police officers from ticketing speeding drivers.

A state law requires cities to do traffic surveys every 7 to 10 years and to set speed limits closer to how fast most motorists are now driving, before police officers are allowed to use radar and other electronic devices to catch speeders. The law is meant to prevent the practice of setting speed traps, in which speed limits are set artificially low to increase the likelihood of citations being handed out.

While police officers could still issue speeding citations, methods available to them on those roads, such as pacing behind a vehicle, have been considered too impractical to apply widely.

With the council’s action Tuesday, and with Los Angeles Mayor Eric Garcetti’s approval, LAPD traffic officers will be able to resume enforcement.

A full list of the speed limit changes, which also includes 12 miles of decreased limits, are here.

City traffic officers will also be able to use electronic devices, such as radar and laser speed guns, to enforce the limits.

For awhile, most of the surveys on the city’s streets were expired, and the city has been working over the past several years to complete them.

As recently as last fall, nearly half of Los Angeles’ streets had speed limits based on outdated speed surveys. Speed limits were expired on about 47 percent, or 596 miles, of streets, rendering those limits unenforceable in most cases, according to LAPD and Los Angeles Department of Transportation officials at the time.