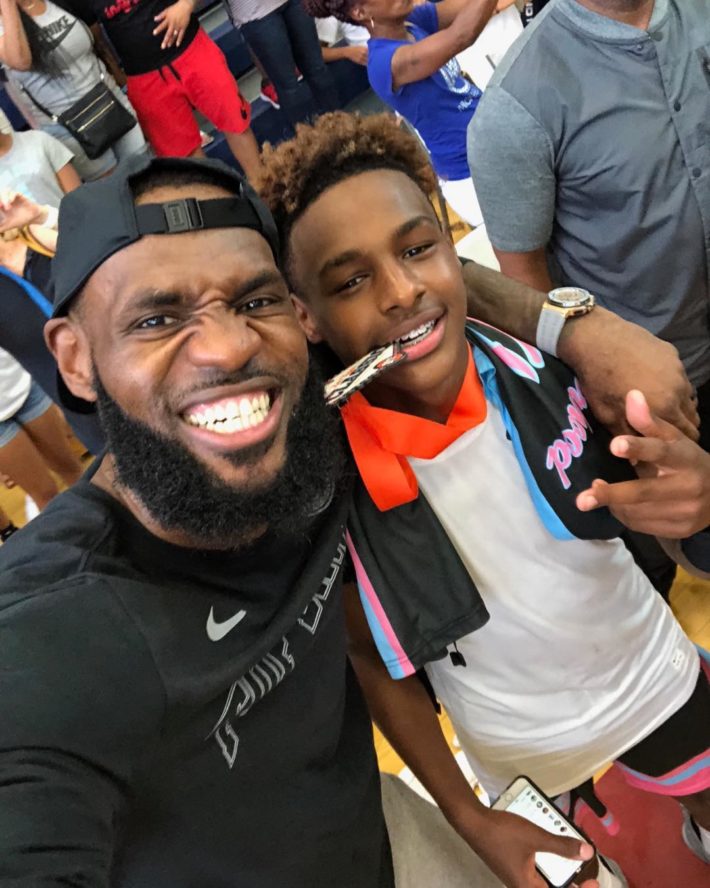 The 14-year-old, who goes by Bronny, scored 27 points in his first game for Santa Monica Crossroads’ eighth-grade basketball team in a win over Culver City Middle School on Monday.

Bronny, who wore No. 0 while playing on the AAU circuit because of his affinity for Russell Westbrook, surprised the Los Angeles Lakers superstar by wearing his dad’s No. 23 for his new team.

“I don’t know how long it’s going to last, but it definitely made me feel proud,” James said of his son’s number switch after Lakers practice Tuesday.

Bronny chose the number but didn’t choose his name, of course. The three-time NBA champion revealed this summer on his HBO series, “The Shop,” that he wished he would have named his first-born son something else.

“I still regret giving my 14-year-old my name,” James said on the debut episode.

“When I was younger, I didn’t have a dad, so my whole thing was when I have a kid, not only is he going to be a junior, I’m going to do everything that this man didn’t do. They’re going to experience things that I didn’t experience. The only thing I can do is give them the blueprint, and it’s up to them to take their own course whenever that time comes.”

Beyond their names, the father and son share a command on the basketball court. James even told ESPN that his son has better handles at his age than he did when he was taking the prep scene by storm as an early teen.

But Bronny is no carbon copy.

Bryce, 11, chose his dad’s uniform number from the Miami Heat, the Olympics and the number he still wears on his Lakers practice uniform.

“It’s like a really good feeling,” James said. “His first game was [Monday], and he had a hell of a game, and both of them play [Tuesday], so I’m going to catch both of their games, but it’s just a proud family going on in our household, and I’m a proud dad.”

For contrast’s sake, James scored only 26 points in his first regular-season game for the Lakers — a 128-119 loss to the Portland Trail Blazers.

James emphasized that his decision to join the Lakers this summer was a family decision, and so Bronny’s first basketball game was an important step in the process for the James gang to continue to get acclimated to their new surroundings.

“It was kind of nervous for all of us because it’s the beginning, it’s the start,” James said. “I mean, he did play flag football. Both of them played flag football before basketball season started, so they got acclimated that way as far as sports, but obviously basketball rings bells in our household, and they both were extremely excited. They laid their uniforms out the night before, they laid their shoes out like it was the first day of school, so it’s a good start for us being in a new school, new community, a new neighborhood.”

While James admitted he does “get a little stressed sometimes” watching his three children perform, overall immersing himself in their lives is a welcome break from his fishbowl existence.

“That’s the best part about it, seeing my kids grow and seeing my boys play sports and my daughter being in dance classes and swimming lessons and things of that nature and being in gymnastics and being able to just go support them,” James said. “The tough part is when I’m on the road and they’re doing those things as well, so that’s a tough part, but the availability when I’m here and they’re working, I get to relax — a little bit.”