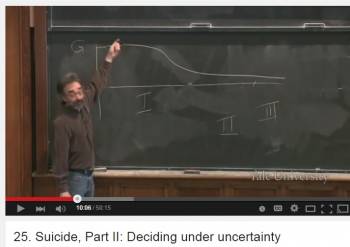 I lost two people I know to suicide recently.

One was a relation thru marriage who I knew only like a fly on one wall might know another fly on another wall.
The other was a good friend that I had spent several months with before his suicide.
My friend was a very successful person, very outgoing, travelled, had plenty of money in the bank, a good family and a good support system>but he was still, unshakeably depressed.
I joined him in an ultra relay that he was doing from early March to late April.
He was also an exceptional athlete. He did the run of 160+ miles, and then he also did the rock climb, the biking and the swimming. He placed in the top 10 from a pool of kick-ass former pro athletes and obsessive money managers. He had told me long before we began, when we were still in training, that the physical challenge was at the top of his bucket list. I also put it at the top of mine. I have a lot of other to-do’s below the relay. Unfortuntely he didn’t.
He had told me he was depressed and we discussed it as much as he could say and I could fathom.
He never told me that he was considering suicide. I would have been compassionate and urged him to see a professional.
His color commentary of his own mind:
If a mind is par at 0; +3 or so is the happy person with an always great outlook who might suffer the unfortunate catastrophe that moves them down a few notches but then the recover back to a happy par. This person never goes to the +8 or the crash of a -8. They are not manic and they are not depressive.
He described his baseline, his regular state, his par as -4. Combinations of meditions got him to a +1.
I think that day he must have hit a a deep low so suddenly that he couldn’t conceive of waiting it out.
He lost himself.
I lost a friend.
The whole thing has been very shocking to me.
This is a video posted by Yale that I am reposting. I have watched it a few times in the past month: