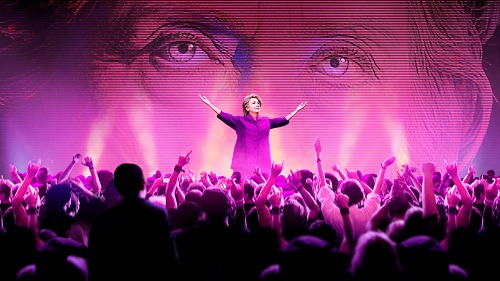 Our political system has transformed. The change is mostly complete and I don’t think cosmetic changes, whichever ornament tops the tree, matters much beyond stylistic preferences.
The Judiciary, Legislative, Executive and even Journalism still exist but they are facades, like a Hollywood film lot that recreates a small town, but the houses are just cardboard and wood and there is no interior, only exterior. We have transformed into an ‘inside out’ corporate totalitarian system.
Fragments of American institutions and iconography remain, deceive a casual spectator with an appearance of continuity. We have transformed. We have become the future.
Decades of chipping away, moral decay, enormous debt, fiscal stimulus that didn’t fiscally stimulate, military adventures, and above all greedy consumption. Was it demands for greater and greater shareholder return? I don’t know.
America has been in love with Italian Fascism and Russian Socialism since it first laid its eyes on them, but World Wars intervened.
But now with decades of distance and a history rewritten, the propaganda machine of the State is fully deployed, 24/7 selling its consumer citizens a diseased political, business, social and personal operating system. Every trick in the book, all the internal agitation, the uniformity of the endless loop of ‘experts’. Obey.
My only advice is don’t believe government about anything, challenge everything. Keep demanding that you want your Constitution back. That same artifact that is being shamed is our nations only life-preserver. That is why it is being marginalized and ridiculed. It is deliberate. Put a book back in your hand, weaponize your mind.
Good luck. You are the resistance.
Disclaimers, trigger alerts and microaggression:
I was born and raised in NYC. I am 50 years old. My bio is here.
I am a (liberal?) Democrat. I have given,hosted,bundled, been on finance committees. I’ve split the vote. I can read polls. I can make up compelling statistics
I was infrequently in school, I cut a lot of classes. I was inadequately indoctrinated and only partially assimilated.
Hobbies: I study Supreme Court decisions, Roman, Greek & American History. I play scrabble.
I have an unpleasant but occasionally profitable habit of asking ‘why’ until I understand all the complexity of something.
I intend to vote for Trump, I wrote about it here