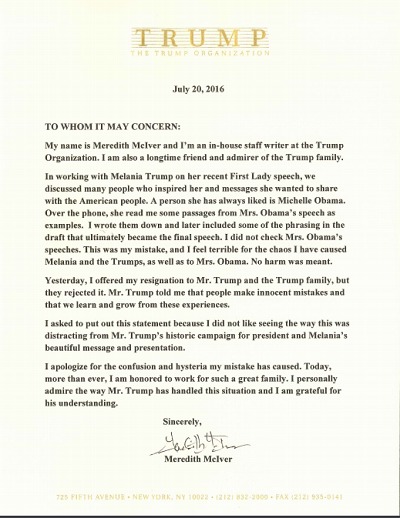 I am Meredith McIver. So are you.
“We are all Meredith McIver” – Meredith McIver
It is self-evident that there is no ‘real’ person who ‘is’ Meredith McIver.
That literary scribe is a figment of Donald Trump. As soon as I saw the text of the apologia it was obvious, it had those same lacking qualities found in any Trump speech. And, at the end of the letter it praises Donald Trump, also a characteristic of every Trump speech.
The media blitz on the Melania sentence snatches was absurd, but politics, especially at this level, is always absurd. Politic is a game of mistakes.
The opponent is always trying to force a fumble. Trump gave up the ball, at least for a few hours. What did him in, in this instance, was nothing ‘real’, that is nothing that is tangible and can be grasped at and articulated. What did him in, in this carnival instance, was his vanity. He loves his wife, she was being criticized, she was probably unfazed as her temperament appears to be humble. He snapped. He made a big mistake.
He will recover from it, but should he?
That is for the voters to decide, just as ultimately the voters will have a referendum on Hillary’s tenure in government and in her criminal culpability in her emailgate. Trump is shoveling away at his own high ground.
Trump has given his adversaries, within and without the Democratic party a precise mind map, how to beat him.Disclaimers, trigger alerts and microaggression:
I was born and raised in NYC. I am 50 years old. My bio is here.
I am a (liberal?) Democrat. I have given,hosted,bundled, been on finance committees. I’ve split the vote. I can read polls. I can make up compelling statistics
I was infrequently in school, I cut a lot of classes. I was inadequately indoctrinated and only partially assimilated.
Hobbies: I study Supreme Court decisions, Roman, Greek & American History. I play scrabble.
I have an unpleasant but occasionally profitable habit of asking ‘why’ until I understand all the complexity of something.
I intend to vote for Trump, I wrote about it here