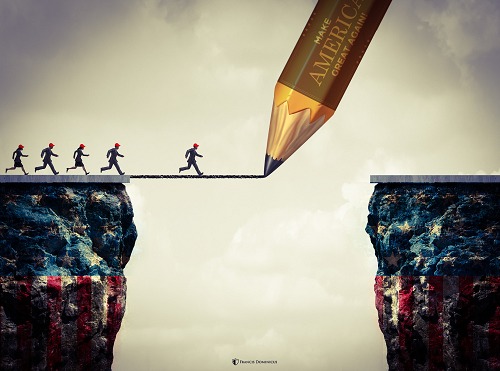 The United States is about to have a quick, robust, reconstitution in manufacturing, infrastructure rebuild and industrial spend and labor demands.
Each of theses dynamics are unique but to keep them all within this post I will explain and abbreviate each. I will also remove the uncertainty, these things will happen. And quickly
Historical funding
Infrastructure financing has been done through public authority issuance of bonds, the interest on which is tax-exempt to the recipient. There are three problems
Lower quality revenue stream projects need an equity component or a guarantee by a creditworthy public authority or municipality. These are becoming scarcer
Construction costs tend to be higher when projects are built by the government rather than the private sector. These higher construction costs offset the benefit of lower interest rates, especially in today’s low rate environment when spreads between taxable and tax-free bonds are so small
Not all projects may meet the complex eligibility rules. Public bonds need to be issued in relatively large amounts so that there is a reasonable aftermarket. The money must also be spent on the project within a certain amount of time relative to the date the bonds are issued. These restrictions limit the extent to which the drawdown of the funds can be matched to the construction schedule. In today’s especially low short-term rate environment this means the project will have to pay a negative interest rate arbitrage on money it actually doesn’t need yet or get a short term construction loan and run the risk that interest rates will rise between the date that the loan is taken down and the date of the long term refinancing.
New funding mechanisms
Offsetting a major portion of project cost with income tax credits that are repaid as issued by means of the tax revenues generated just by the construction. Because the combination is revenue neutral, whatever taxes flow from the actual operation of the new infrastructure will be additive to tax revenues.
This will provide maximum flexibility to the states and employ incentive-based contracting where appropriate to ensure projects are on time and on budget. It would link increases in spending to reforms that streamline permitting and approvals, improve the project delivery system, and cut wasteful spending on boondoggle bridges and highways to nowhere. The plan also could be applied whether the facility was operated by the government, the private sector, or in a public-private partnership
Build America Bond program. Permits government issuers to issue taxable bonds instead of tax-exempt ones. This provides issuers with access to investors who seek table income and therefore broadens the potential market. Build America Bonds still need to be made creditworthy either by strong guarantees or equity beneath them, and they still need to be serviced by a revenue stream
Pension funds, insurers and other institutions with long-term liabilities. The long-term nature of infrastructure programs means these investments are structurally well matched to the revenue flows from the debt that finances their construction, operation and maintenance.
Recently the Japan Government Pension Investment Fund has been in cabinet-level talks. The GPIF will purchase debt issued by American corporations to finance infrastructure projects. Up to 5% of the roughly $1.14 trillion in assets controlled by the megafund can go toward overseas infrastructure projects
Tax Repatriation Taxing US companies’ accumulated offshore profits at 10%, down from the current top corporate income tax rate of 35% on a one time basis if they repatriate those monies. US companies hold about $2.5 trillion in earnings overseas because current federal law allows them to indefinitely defer paying taxes on these profits until they return them to the USCompanies paying the ten percent tax on the repatriation of overseas retained earnings could use the tax credit on infrastructure equity investment to offset their tax liability on bringing the money back. This would effectively convert a tax liability into an equity investment in an infrastructure project.
Repatriate $1 billion, incurring $100 million of tax, and invest $121 billion in the equity of an infrastructure project.
The 82 percent tax credit on the $121 thereby fully extinguishes the repatriation tax so they have a $121 million infrastructure equity investment and no tax bill while the US has more and new infrastructure

The Trump infrastructure tax financing plan
A major private sector, revenue neutral option to help finance a significant share of the nation’s infrastructure needs. For infrastructure construction to be financeable privately, it needs a revenue stream from which to pay operating costs, the interest and principal on the debt,and the dividends on the equity.
The difficulty with forecasting that revenue stream arises from trying to determine what the pricing, utilization rates, and operating costs will be over the decades. Therefore,an equity cushion to absorb such risk is required by lenders. The size of the required equity cushion will vary with the riskiness of the project. Assuming an average leverage will be about five times equity.
Financing a trillion dollars of infrastructure would require an equity investment of $167 billion. The equity will require a payment stream of as much as a 9%to 10% rate of return over the same time periods. To encourage investors to commit such large amounts, and to reduce the cost of the financing, government would provide a tax credit equal to 82% of the equity amount. This would lower the cost of financing the project by 18% to 20% for two reasons.
1. Tax credit reduces the total amount of investor financing by 13.7%, that is, by 82% of 16.7%. The tax credit will be cushion beneath the debt, but from the investor point of view, 82 percent of the commitment has been returned. This means that the investor will not require a rate of return on the tax credited capital. Equity is the most expensive part of the financing; it requires twice as high a return as the debt portion, 9 to 10% as compared to 4.5 to 5.0%. Therefore,the 13 percent effective reduction in the amount of financing actually reduces the total cost of financing by 18 to 20 percent. By effectively reducing the equity component through the tax credit, this similarly reduces the revenues needed to service the financing and thereby improves the project’s feasibility.
Tax credits offered by the government would be repaid from the incremental tax revenues that result from project construction in a design that results in revenue neutrality. Two identifiable revenue streams for repayment are critical:
Tax revenues from additional wage income
Tax revenues from additional contractor profits
For example, labor’s compensation from the projects will be at least 44 percent. At a 28 percent tax rate, this would yield 12.32% of the project cost in new revenues
2. Assuming contractors earn a fairly typical 10 percent average profit margin, this would yield 1.5% more in new tax revenues based on a tax rate of 15 percent.
Trade deficit
The trade deficit last year was $463 billion. This is 4.7 percent of gross domestic product. In the 1970s it was 0.5 percent. These deficits are being financed largely by the governments of China and Japan and to a lesser extent other East Asian nation by purchases of U.S. Treasury bonds.
The rebuild
Every $200 billion in additional infrastructure expenditures creates $88billion more in wages for average Americans and increases real GDP growth by more than a percentage point. Each GDP point creates 1.2 million additional jobs.
US ranks ninth in roads investment as a percent of GDP and twelfth on the Global Competitiveness Index in infrastructure
The US has infrastructure needs of about $3.6 trillion through 2020, including $1.7 trillion for roads, bridges and transit alone
More than 60,000 American bridges are considered structurally deficient
Traffic delays cost the U.S. economy more than $50 billion annually
iPhones are smarter than many of our air traffic control systems
Water in cities like Flint, Michigan is unfit to drink,and over 6 million Americans are potentially exposed to contaminated water.
Labor market
The US unemployment rate has now fallen below 5% and continues to decline. That leaves very little slack in the labor market to prevent cost-push inflation from being generated. There wil be shortages in the labor market.
Infrastructure projects are one of the few high paying jobs that could employ the less well educated segment of the American population.
Most of the high wage jobs will be in advanced manufacturing. In the electronics industry that means focusing on components, materials, production machinery, and other so-called producers’ goods. Such goods typically entail production systems that are both highly capital-intensive and knowhow-intensive. The knowhow, moreover, is of a special, quite rarefied kind in that it resides not in the minds of ordinary production workers but rather consists typically of machine settings known only to a few top engineers.
Incumbent companies are shielded from new competition. Deploying capital-intensive production techniques, they can afford to pay high wages and still dominate world markets.
Technical proficiency in manufacturing is both sequential and hand’s on. There is no substitute for grinding it out and expertise resides in the minds of those who practice a science or art and not in any thing or magical substance.
Pundit economists believe that just by changing the scalar value of a variable in an equation that they can tweak or alter an economy. If this were true, then demand could be created in African countries and they would become first-world nations overnight.
It will be far less difficult for Motorola to build and staff their electronics factory in Toledo versus Chihuahua, capital depreciates and must be replaced. Often it is cheaper to build from scratch.
The end?