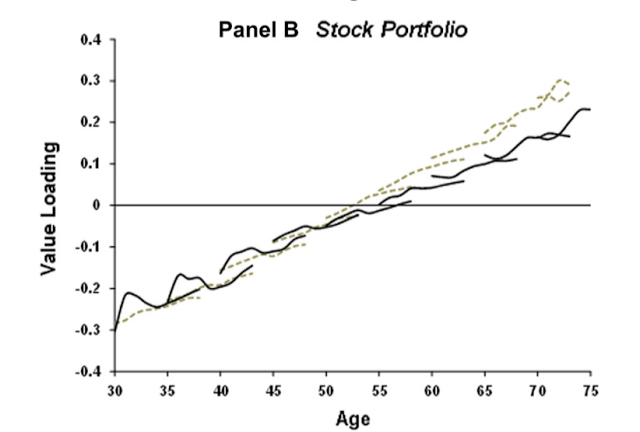 The February Issue of the Journal of Finance made it to the top of my stack, and it has a lot of good articles. The first two especially caught my attention, Who Are the Value and Growth Investors? by Sebastien Bertermeier, Larent Calvet, and Paolo Sodini, and Asset Pricing Without Garbage by Tim Kroencke. A review, followed by more philosophical thoughts.
I  Bertermeier, Calvet, and Sodini.
Background: Value stocks (low price to book value) outperform growth stocks (high price to book value). Value stocks all move together — if they fall, they all fall togther — so this is a “factor risk” not an arbitrage opportunity. But who would not want to take advantage of the value factor? This is an enduring puzzle.
Fama and French offered one of the best paragraphs in finance as a suggestion:
One possible explanation is linked to human capital, an important asset for most investors. Consider an investor with specialized human capital tied to a growth firm (or industry or technology). A negative shock to the firm’s prospects probably does not reduce the value of the investor’s human capital; it may just mean that employment in the firm will expand less rapidly. In contrast, a negative shock to a distressed [value] firm more likely implies a negative shock to the value of specialized human capital since employment in the firm is more likely to contract. Thus, workers with specialized human capital in distressed firms have an incentive to avoid holding their firms’ [value] stocks. If variation in distress is correlated across firms, workers in distressed firms have an incentive to avoid the stocks of all distressed firms. The result can be a state-variable risk premium in the expected returns of distressed stocks.
But nobody has seen these investors, who shun value stocks despite their high average return, because value stocks are correlated with those investors’ human capital. Value funds tend not to have many customers who come in, learn about the value/growth premium and factor and say “thanks, I’d like to short value” (Lots want to buy hot growth stocks, but hedging is probably not directly on their minds, and it takes a pretty strong “as if” argument to ignore that)
Enter Bertermeier, Calvet, and Sodini.
we examine value and growth investments in a highly detailed administrative panel that contains the disaggregated holdings and socioeconomic characteristics of all Swedish residents between 1999 and 2007.
Value investors are substantially older, are more likely to be female, have higher financial and real estate wealth, and have lower leverage, income risk, and human capital than the average growth investor. By contrast, men, entrepreneurs, and educated investors are more likely to invest in growth stocks.
over the life cycle, households climb the “value ladder,” that is, gradu- ally shift from growth to value investing as their investment horizons shorten and their balance sheets and human capital evolve.
…we find that a single macroeconomic factor—per-capita national income growth— explains on average 88% of the time-series variation of per-capita income in any given two-digit SIC industry. Households employed in sectors with high exposure to the macroeconomic factor tend to select portfolios of stocks and funds with low value loadings. … Furthermore, we show that cross-sectoral differences in loadings are more pronounced for young households than for mature households, consistent with the intuition that human capital risk is primarily borne by the young. As a result, the value ladder is empirically steeper in more cyclical industries.
…More financially secure households should generally be better able to tolerate investment risk .. Consistent with these predictions, we document that households with high financial wealth, low debt, and low background risk tend to invest their financial wealth aggressively in risky assets and select risky portfolios with a value tilt.
The numbers seem big to me. For example, Figure 2:

This is the “variance ratio” graph. A random walk has a flat line. An upward sloping line means positive serial correlation — high growth this year is likely to be followed by high growth next year. A downward sloping line means negative serial correlation. The variance ratio is particularly good at detecting long-run unstructured mean reversion.
You knew that filtering would lead to spurious positive serial correlation in consumption growth. How much? All of it!
The random walk in consumption (going back to Bob Hall’s beautiful paper) is a very nice intuitive result. If you know you’re going to be better off in the future, go out to dinner now. Consumption should be like stock prices.
It matters particularly now, in the context of the “long run risks” model, for a very prominent exampleBanal Kiku and Yaron Long run risks. That whole model depends on the idea that long run risks are larger than short run risks, which they infer from the positive serial correlation of consumption growth. If consumption is a random walk, long run risks collapse to power utility. (More in a recent review.)
(To be fair, this criticism addresses the univariate properties of consumption. It is possible for a series to be a random walk in its univariate representation, but forecastable by other variables. Stock returns themselves are a great example, a nearly perfect univariate uncorrelated process, but forecastable by price-dividend ratios. So, the next round of “long run risks” may well find long run consumption growth forecastability from other variables, like P/E ratios.)
Thoughts
Why do I like these papers so much? I guess in part, they confirm my priors. One has to be honest. But that is a terrible reason to like and blog about papers. The blogosphere is full of “studies show that” whatever point one wants to flog today.
I like them because I think they’re well done, and make the case convincingly.
Most of all, I like them because they show how after long and patient work, involving taking data really seriously, phenomena that seem like “puzzles,” needing to be addressed by new and inventive theories, really are not puzzles, and explainable by simple economics.
This is “normal science” at its best. Looking back on the history of science, over and over, observations seemed not to fit good theories, and resulted in hundreds of new and creative “explanations.” Once in a great while those puzzles result in dramatically new theories, which we celebrate. But far more often, after decades, and centuries at times, dogged persistent work showed how indeed things work as you think they might, and the original simple theory was right after all. The “rejections” of the consumption based model started around 1980. It took a long time to see the glass is not completely empty.
Everyone wants to be the “paradigm shifter,” and the journals have about 10 new theories in every issue. Of which 9.99 are soon forgotten.
Part of my psychological makeup, part of what attracted me to economics all along, are the far more frequent cases in which dogged work shows how supply and demand indeed explain all sorts of puzzles.
I like “normal science.” And I think we should celebrate it more.
2017/03/more-good-finance-articles.html