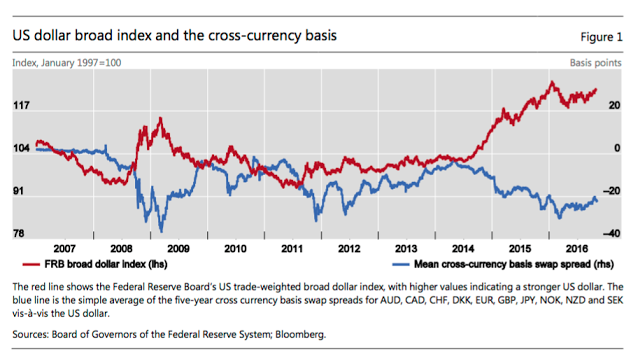 Several correspondents were kind enough to send me additional work on covered interest parity.
There are two big questions (and a third at the end): 1) what force pushes prices out of line? 2) what force stops arbitrageurs from taking advantage of it, and thereby pushing prices back in line?

point out that the price whose variation drives arbitrage is the forward rate.
Interest rates in the cash market and the spot exchange rate can be taken as given – these markets are much larger than those for FX derivatives. Hence, it is primarily shifts in the demand for FX swaps or currency swaps that drive forward exchange rates away from CIP and result in a non-zero basis
So who is putting pressure on forward markets?

[the paper] focuses on one key source of pressure on the basis, namely net foreign currency hedging demand that is largely insensitive to the size of the basis…
A first, structural source of demand for foreign currency hedges arises frombanks’ business models. For a long time, banks have been the main players runningcurrency mismatches on their balance sheets (managed mainly via swaps)…
The second source of demand arises from the strategic hedging decisions ofinstitutional investors, such as insurance companies and pension funds..
The third source of demand arises from non-financial firms’ debt issuance acrosscurrencies as they seek to borrow opportunistically in markets where credit spreadsare narrower…
Recently, for instance, many US firms needing dollars have been issuing in euros to take advantage of very attractive spreads in that currency and have then swapped the proceeds into dollars ..
This is a more satisfying story to me than the story that the exchange rate and interest rates are under pressure from people doing the carry trade — borrowing cheap and lending dear unhedged. The carry trade only exists because some other flow is pushing rates in the opposite direction, and then my head starts to spin on all these “demands” for specific securities. An underlying demand for FX hedging that makes a bit more sense.
The dollar, bank leverage and the deviation from covered interest parity by Stefan Avdjiev, Wenxin Du, Catherine Koch and Hyun Song Shin has a gorgeous fact: (picture below)

Deviations from CIP turn on the strength of the dollar; when the dollar strengthens, the deviation from CIP becomes larger.
The interpretation is a little less clear to me, but I didn’t spend enough time with the paper
the value of the dollar plays the role of a barometer of risk-taking capacity in capital markets….
To the extent that CIP deviations turn on the constraints on bank leverage, our results suggest that the strength of the dollar is a key determinant of bank leverage.
Why do the CIP deviations narrow when the domestic currency strengthens against the dollar? Underpinning this relationship is the role of bank leverage and cross-borderbank lending in dollars. Indeed, we will show the existence of a “triangle” that coherently ties together (i) the value of the dollar (ii) the cross-currency basis and (iii) cross-border border bank lending. In this triangle, a depreciation of the dollar is associated with greater borrowing in dollars by non-residents.
I can see many less institutional stories associated with such a big fact.

On the second question, why don’t arbitrageurs do a better job, Darrell Duffie The covered interest parity conundrum  explains balance sheet constraints and debt overhang well. If an arbitrage opportunity transfers more wealth to creditors, by making debt safer, than it makes for equity holders, the equity holders might not do it.
A CIP basis trade may require an expansion of abank’s balance sheet, which, in turn, implies an increase in the amount of capital required by regulation. Adding capital can benefit a bank’s creditors at the expense of its shareholders. [Example follows]
That is, by making the balance sheet safer through increased capital, with essentially no increase in risk, the trade has shifted some of the value of the bank’s assets away from its equity owners to its creditors. The equity owners have given up 12bp to creditors, so the bank should only be willing to do the trade if the magnitude of the CIP basis is at least 12bp, net of transactions costs.
…even a true arbitrage is not necessarily attractive to bank shareholders.
A commonly stated rule of thumb is that a balance-sheet-expanding trade is justified if it generates a profit in excess of the bank’s return on equity (ROE) multiplied by the amount of capital required for the trade. This is not correct. If it were, then a riskless arbitrage would have the same required profit per unit of capital as a risky real estate loan. That makes no sense.
Also, as last time,
That regulatory capital constraints play a big role in the CIP basis is buttressed by the fact that
the magnitude of the basis in some currencies, especially yen, increases sharply at quarterends,when non-US banks are checked for capital adequacy.
Segmented Money Markets and Covered Interest Parity Arbitrage Dagfinn Rime, Andreas Schrimpf,  ad Olav Syrsatd also looks more at the costs of arbitrage
[ First,] measures of CIP deviations based on Overnight-Index-Swaps (OIS) rates, General Collateral (GC) repo and Inter-Bank Offer Rates (IBOR) do not adequately account for the cost of trading faced by a typical arbitrageur in this market. In particular, such common measures of CIP deviations do not adequately account for risk factors related to the usage of balance sheet.
Second, we find that once arbitrageurs’ marginal funding costs are adequately reflected via the choice of interbank money market rates, any alleged profits from CIP arbitrage entirely vanish (or are only detectable in short-lived stress episodes).
Third, we find that arbitrage opportunities in international money and FX swaps markets are economically viable for only a confined set of market participants.
Finally, we show that any potential CIP arbitrage opportunities based on non-bank money market funding sources are significantly reduced if we base the analysis of arbitrage profits on the US dollar commercial paper rate for lower-rated banks.
One of the big questions as I see it is whether “balance sheet constraints” — not enough capital — or “funding constraints” — can’t borrow at rates to make it attractive — are crucial for limiting arbitrage. This seems to say a bit of both. (Their notion of funding cost seems to include the shadow value of capital and other risk constraints.)  It is nice verification that only big banks can do this trade.
Keep in mind some of these papers focus on different issues. For example, the end of quarter spike is hard to explain by direct funding costs, unless funding costs also spike at quarter ends, which I don’t think they do.
The third question is, why don’t non-arbitrageurs, simple long-only investors, go buy from the cheaper source, thereby pushing prices back in line?  None of the papers address this question, but maybe because the answer is so obvious. We are still talking about small differentials. If you can get 50 basis points — 0.5% — more on your money by investing abroad with a FX hedge, that might not seem worth the bother for a checking account, at least in the short run, and at least in a dynamic way. A money market fund, which would have to have floating values, advertising it follows this strategy might have a hard time competing with a high yield fund. Yes, you and I know that one is an arbitrage (less counterparty and funding risks) and the other has some credit risk (less the chance of bailouts), but that might take a while to convince investors. A 50 bp arbitrage opportunity is a huge profit to someone who can lever it many times, but not a huge difference to long-only investors. I still get 0.01% on my checking account, even though Chase turns it around and gets 0.75% interest on excess reserves with the money. That’s a bigger spread.
That fact also raises the question just how important this is. That you can get 50 bp more or less in various short term credit instruments is interesting, but how much social cost is there?
2017/03/more-covered-interest-parity.html