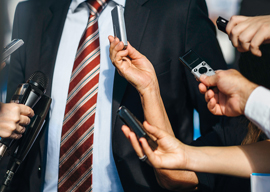 But the second and more compelling reason to pity the poor politicians is that theirs is a dreadful life judged by normal standards. If it has its compensations, such as power, money, and bodyguards, they are bought at a dreadful cost. The other day I caught a glimpse of what that life must be like.
A television crew came to make a documentary about me. It will last about 45 minutes, will be watched (thank goodness) by only a small audience, and took two and a half days’ filming to make. The television crew was very nice, which is not my universal experience of television people, to put it mildly; but even so, two and a half days being followed by a camera is more than enough to last me the rest of my life.
I found the strain of it considerable, even though, really, nothing was at stake. It did not matter in the slightest, not even to me, if I made a fool of myself by what I said. There would be no consequences for my career, such as it is (it is almost over); there would be no humiliating exposures of my fatuity in the press, no nasty political cartoons as a consequence, and no insulting messages over the antisocial media. The television team was clearly not out to trip me up or perform a hatchet job on me. It was friendly and I could trust it not to distort what I said by crafty editing. But all the same, the attempt to act naturally while in the constant presence of a camera and a microphone with a furry cover was tiring. The order to be natural is a contradiction in terms. You might as well order someone to be happy.
Of course, one grows accustomed to anything in time. Just as a bad smell disappears from one’s awareness if one remains for long enough in its presence, so eventually one forgets about the presence of a camera and a microphone. No doubt politicians who live half their waking time within the field of these instruments learn to ignore their physical intrusiveness; but, of course, much more is at stake for them than it ever was for me. They are under constant surveillance; and just as the pedant reading a book pounces upon an error, even if it be only typographical, and marks it with his pen, so journalists and political enemies pounce upon a gaffe uttered by a politician and try to ruin him with it. And the more subjects come under the purview of political correctness, the easier it becomes to make a gaffe that will offend some considerable part of the eggshell population. In fact, much of that population actually wants to be offended; being offended is the new cogito that guarantees the sum. I am offended, therefore I am.
{pagebreak}
Most people who speak for more than a few minutes will say something stupid or offensive to someone; and thanks to cameras and microphones, all that a politician says is recordable. In effect, modern politicians live under a totalitarian regime.
This means that, with few exceptions, only a certain kind of person, with very little attachment to his own personal liberty, will go in for a political career. This might be indicative of self-sacrifice, but more likely of vaulting ambition. And a person who attaches little value to his own liberty is unlikely to attach much value to the liberty of others. After all, if we can do without something, we assume that others can do likewise. As the politician prefers power to liberty, so he will assume that his electorate will prefer security, or some other advantage, to liberty.
But however careful a politician is, it is unlikely that he will altogether escape insult and demeaning commentary, all the more so in this age of easy communication, so much of which consists of insult and little else. He must therefore be a person with a rhinoceros hide; but people with rhinoceros hides are not necessarily attractive in character. Mr. Trump again seems different, in that he combines a rhinoceros hide with a thin skin. The insult du jour seems to sting him, but the pachydermatous integument remains fundamentally intact.
“A policeman’s lot is not a happy one,” sings the police sergeant in The Pirates of Penzance; but neither is a politician’s, unless he is a psychopath. And if he is not a psychopath or a megalomaniac, he is the most self-sacrificial person imaginable, far more devoted to the public good than any carping critic. I have met a few of these types; the trouble is that they rarely seem to rise to the top. If they achieve any kind of office, they soon resign on principle, leaving the field to the pachyderms and the personality disorders.