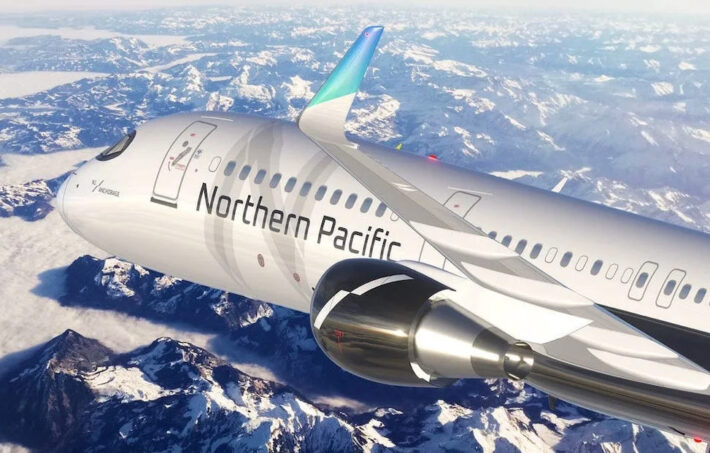 America’s newest airline is one step closer to becoming a reality.

Anchorage-based Northern Pacific Airways on Tuesday revealed its livery on its first Boeing 757-200 at hangar event in San Bernardino, California.

The most important thing about the livery, designed by Edmond Huot, is how it symbolizes Northern Pacific’s Alaska home, CEO Rob McKinney told TPG in an interview.

“I had really only left the designer with two instructions,” he said. “One is that I wanted to make sure everyone understood we’re an Alaskan company and we’re about Alaska and we care about Alaska. And then the other thing was I wanted to be cool and edgy, and I want it be one of those airplanes that when it taxis by everyone goes, ‘ooh!’.”

Northern Pacific aims to be the Icelandair of the Pacific — selling stopovers in Anchorage as the airline brings travelers between the U.S. and Asia. It plans a low-cost carrier model that it expects to launch in the third or fourth quarter of 2022, McKinney said.

Given that Japan and Korea are still closed to tourism, McKinney said his plans are fluid.

Beyond the nine already secured, McKinney hopes to acquire another three 757s for the airline’s launch.

The airline is targeting a capacity of about 180 seats in its 757s. It’ll feature a three-cabin layout, with about 12 first-class seats, as well as premium economy and economy class.

McKinney is currently CEO of Ravn Alaska, an airline purchased out of bankruptcy in 2020. Ravn operates regional turbo-prop flights around Alaska and is being used as a platform to launch Northern Pacific. Each carrier will operate as its own brand under the same operating certificate.

“Ravn Alaska is essentially the same air carrier as will be Northern Pacific,” he said.

The airline plans to use Ravn’s cryptocurrency-based loyalty program, FlyCoin, and assume its interline agreements. Most notably, Ravn currently partners with Alaska Airlines.

“You can either buy future travel with your cryptocurrency, or you can put it on the exchange and trade it to some other kind of cryptocurrency, you can trade it back into fiat money,” he said. McKinney said they’re hoping for an agreement that will even allow merchants at the Ted Stevens Airport in Anchorage to accept FlyCoin as a form of payment.

More: How a pilot shortage could leave travelers with higher fares and fewer options

One potential obstacle to Northern Pacific’s launch is the ongoing pilot shortage. McKinney said he plans to target pilots who were forced into early retirement due to the COVID-19 pandemic.

Eventually, McKinney says he hopes to vertically integrate the pilot pipeline between Ravn, Northern Pacific, and FLOAT Shuttle, another one of his aviation ventures.

“So you’ll have from the right seat of a [Cessna] Caravan to the left seat of a Boeing going international, a one-stop-shop for your whole career and we’ll be kind of our, our own pilot mill.”

McKinney himself is a licensed pilot and has a love for the 757. He hopes one day to get a type rating that allows him to fly the jet.