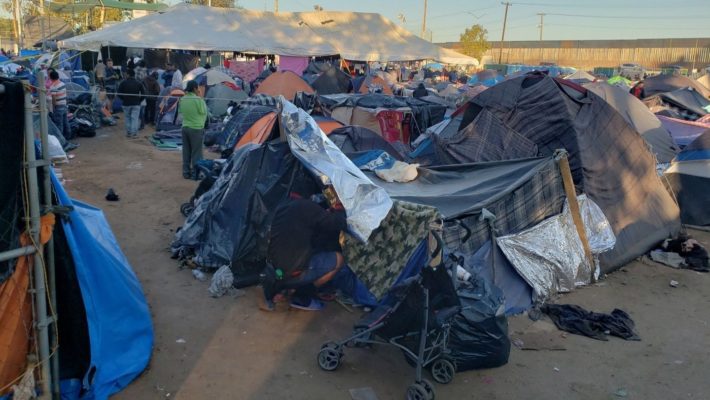 It is only in an administration as dysfunctional and truth-averse as this one that people from other countries exercising their statutorily defined right to seek asylum in the U.S. can be viewed as taking advantage of a “loophole” in immigration laws.

On Monday, the government released statistics showing that the number of people seeking asylum at the border with Mexico has skyrocketed from 55,584 in 2017 to 92,959 in 2018, most of them unaccompanied minors or families with minor children. But asylum seekers still make up only a thin slice of the total number apprehended at the border — 18%, up from 13%.

And two-thirds of asylum-seekers are denied, a percentage that has risen dramatically under Trump policies narrowing the conditions that meet the asylum standard. The vast majority of asylum-seekers are fleeing violence and poverty in Honduras, Guatemala and El Salvador — conditions that have been influenced by U.S. policies, particularly those of the Reagan and first Bush administrations. Whether those were good or bad policies is a topic for another discussion, but the U.S. decision to support anti-leftist actors during insurrections and civil wars added to the violence and destabilization of the region. Those actions helped lay the foundation for other problems too, from corrupt governments to powerful street gangs, some of which came together here in Los Angeles.

People seeking protection from those conditions are the “criminals” and “unknown Middle Easterners” (a whopper, that one) Trump has been railing about as he first sought to fire up his supporters ahead of the November midterms, and now as he tries to squeeze $5 billion out of a Congress whose members — from both parties, mind you — recognize that a massive wall from the Pacific to the Gulf of Mexico will have little effect on illegal immigration or drug smuggling (most of which comes through ports of entry).

Notably, Trump’s wall would have a negligible effect on asylum-seekers, since they by definition are showing up at the border and asking for help. The government would have to deal with those claims no matter how people arrive — on a raft across the Rio Grande, on foot through the Sonoran and Chihuahuan deserts, or simply walking up to the San Ysidro crossing.

On Monday an administration official told reporters that the asylum system is overwhelmed by the number of applicants, which is the administration’s rationale for trying to make them wait their turn in Mexico. While it’s reasonable to give the government some flexibility in managing the intake, given a short-term surge in people seeking to file asylum claims, it is unreasonable and possibly illegal for the government to make people wait in dangerous conditions simply because it doesn’t have enough bureaucrats to do the job.

The immigration system has been underfunded and overwhelmed for years — this isn’t new to Trump. But his draconian ideas on how to handle asylum requests defy past practices and run counter to the intent of Congress when it framed the asylum laws within a broadly accepted international belief that people have a right to seek sanctuary in other countries, and that people should not be returned to places where their lives or liberty are in jeopardy.

But returned they have been. The Washington Post reported recently on a Honduran father who had testified against MS-13 gang members in a Virginia case and feared the gang would kill him if he returned to Honduras. The immigration judge sent him anyway. He was killed.

No one tracks deportees once they’ve left the country, so the U.S. government has no idea how many people whose asylum claims were rejected wound up dead in their home countries. The New Yorker earlier this year carried a report by the director of the Global Migration Project, at Columbia University’s Graduate School of Journalism, which compiled a database of more than 60 cases of people who after deportation had been targeted, many of them killed.

To Trump, the solution to all of this is to simply stop accepting as many asylum requests. But the government can’t do that — asylum is spelled out in black-letter law, and Trump’s efforts to undermine or simply ignore the law should have conservatives in an uproar. But most of them have given up any pretext of believing in the rule of the law or respect for established norms of political behavior (Exhibit A: Silence among GOP members of Congress over Trump’s smorgasbord of scandals).

There are steps that could address both the outflow of migrants from Central America and the increase in asylum requests.

First, instead of reducing aid programs to Central America, as Trump has threatened, the U.S. could spend more money on stabilizing the region’s economy, countering corruption and improving the conditions that are causing so many to flee their homes. The administration of newly installed Mexican President Andrés Manuel López Obrador announced Monday that Mexico would invest $30 billion over five years in Central America’s northern triangle countries to try to help stabilize the region. That’s the right approach — more investment, rather than the Trump policy of less investment.

Second, the Trump administration could increase the capacity of the immigration system itself. One of the biggest failings of the current system is that there simply are not enough immigration judges to handle the workload. To the administration’s credit, it has added judges and support personnel, but at nowhere near the levels necessary to handle the backlog of more than 700,000 cases — a number that exceeds 1 million if you count suspended cases (usually for people awaiting word on visa applications) under a policy that Jeff Sessions ended before Trump fired him as attorney general.

There are fixes, policies and solutions to mitigate the flow of migrants. Now if only the administration and Congress were interested in pursuing them.