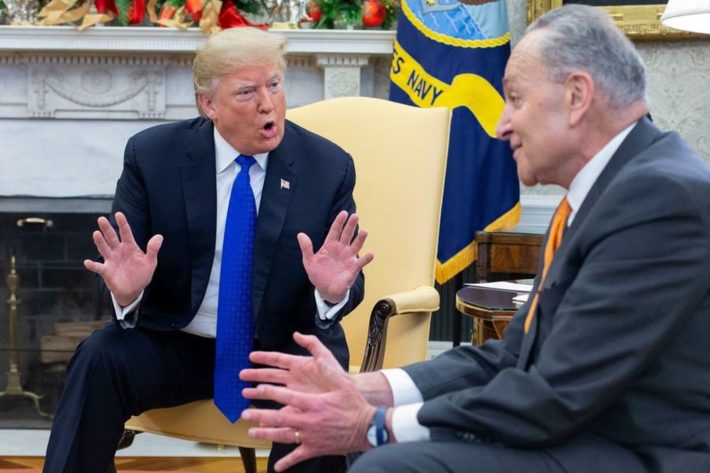 When Washington braces for a potential government shutdown, the usual ritual is that Republicans and Democrats will posture over who will get blamed.

President Trump, however, made it clear Tuesday morning that he will be the one shutting down the government if Congress doesn’t provide money for the bigger, more expansive wall he has promised to build along the southern U.S. border.

Meeting with the top House and Senate Democrats, Trump engaged in a surprisingly public airing of differences over the last remaining appropriations bills. Funding for about half of the federal government will run out Dec. 21 unless Congress acts to extend it, but it appears that lawmakers and Trump are at an impasse — he wants $5 billion to help fund his project, but he may not have enough votes for the wall funding in either chamber.

This isn’t because lawmakers think border security is strong enough already. It’s because many of them don’t think a bigger wall is the right way to shore up the southern border.

Anyway, Senate Minority Leader Charles E. Schumer (D-N.Y.) and House Minority Leader (and soon to be Speaker) Nancy Pelosi (D-San Francisco) took pains while the media were present to pin the blame for any shutdown on Trump. In fact, they called it the “Trump shutdown.”

Trump initially sought to blame Senate Democrats for the holdup, but Pelosi argued that Trump doesn’t have enough support from House Republicans to get the wall funded. (The House Appropriations Committee included $5 billion for the wall in its version of the fiscal 2019 spending bill for the Department of Homeland Security, but GOP leaders never brought the bill to the House floor, suggesting they don’t have enough Republican votes to pass it.) So eventually Trump declared, “You know what I’ll say? ‘Yes, if we don’t get what we want one way or the other, whether it’s through you, through military, through anything you want to call, I will shut down the government.’”

Just to make sure the point was not too fine, he added, “And I am proud to shut down the government for border security, Chuck, because the people of this country don’t want criminals and people that have lots of problems and drugs pouring into our country. So I will take the mantle. I will be the one to shut it down. I’m not going to blame you for it.”

Well, that settles that! Except that it doesn’t. Trump is betting that the public will fear migrants more than it will care about some federal agencies going temporarily dark. So he’s calculating that the blame game won’t matter so much this time.

“President Trump made clear that any government funding measure must include responsible border security, including a wall, to protect the American people from drugs, crime, terrorism, public health threats, and the severe straining of the social safety net. Illegal immigration is deeply unfair to American workers, wage-earners, and taxpayers — costing billions of dollars and thousands of innocent lives.

“So far, the Democrat Party has made clear they would rather keep the border open than the government open. President Trump was grateful for the opportunity to let the press into the meeting so that the American People can see firsthand that while Republicans are fighting to protect our border, Democrats are fighting to protect illegal immigrants. This Administration will always put Americans first.”

Just to be clear here, just about everything Sanders said about what the wall would protect against is not supported by evidence or experience. Just to take one — people in the country illegally aren’t eligible for any of the federal safety net programs, so it’s hard to see how they could be severely straining it. Yes, California has chosen to spend its own tax dollars extending Medi-Cal to some noncitizens, but only to children, whose healthcare costs are relatively low.

Beyond that, a wall doesn’t “protect” anyone against people who overstay their visas, a growing proportion of the undocumented population. In fact, according to the Department of Homeland Security, almost twice as many people came to the U.S. legally and overstayed their visas as crossed the border illegally.

Regardless, Trump’s tactic is typically bold and risky. In previous shutdowns — this year, during President Obama’s second term and President Clinton’s first term — big, important issues were on the table: relief for “Dreamers,” the fate of Obamacare and funding for major federal benefit programs, respectively. And in each case, polls showed that the public objected to the shutdown regardless of the issues at play. People want a functional government. They don’t want agencies held hostage to a policy agenda, especially not one that’s contentious.