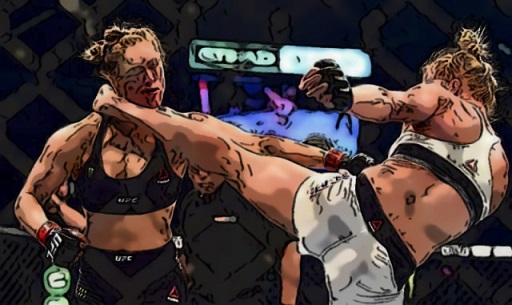 Athletes are a consumer item and Ronda Rousey was on the shelf at eye level.
She sold a lot of herself.
She is a great athlete and a better myth maker. She found fans. How many will stay with mixed martial arts after her loss is unknown. I think she can preserve a sliver of her base of fans, the ones who knew Ronda, not the sport. For those fans, it was all about the performer, not the stage.
Her career as a fighter is over.
Ronda Rousey has been completely figured out, her style and the machinery of her mind. She will be knocked out again and again.
Ronda looked like a school yard bully getting their comeupance. She was a ‘not’ immoveable object that got knocked out quickly by a well rounded and prepared fighter, and there are many more fighters waiting in line to punch her clock.
These are sum of her parts:
Ronda boasted that she is the most drug tested athlete in the UFC. It reminded me too much of Lance Armstrong and his similar claim. At the fight she looked to be in the worst shape of her entire career and she gassed very quickly.
One contributing factor to Rousey being gassed so early in the fight was she was aspirating. Small drops of blood were getting into her lungs and limiting her ability to get oxygen sucked up.
Another factor was how much chasing she was doing. She couldn’t find Holly Holm because she was moving only forward and Holm was always to her side and not letting Rousey reset. This is really basic stuff, its 101. She knew she was swallowing blood and she knew that Holly was fighting a patient tactical fight. So why didn’t Rousey correct herself in the ring?
Rousey didn’t have the skills. She never worked on anything but chase, flip and arm bar. Ronda had no head movement whatsoever and it takes years of practice to get it for the most dedicated fighter. If Rousey started now she’ll have adequate head movement by the time she’s 40.
Rousey is not disciplined. A fighter has to have a plan and stick to it. Everybody in the octagon is a good athlete, its who executes the best that makes champions. Its an actor’s script. There is a type of person who has a false pride, they are better than a plan. They will adhere to the plan until they get a little flustered, then its an emotional outburst. And Rousey gets knocked out. Holly Holm’s trainers Winklejohn, Jackson and their coaches observed not just the stylistic and physical limitationso of Rousey, but the mental ones, and they leveraged it perfectly.
Rousey is not a good fighter. She took punches and kicks that no top fighter in their prime should ever be caught with. Period. Write your own analogy.
Theatrics. Rousey enjoys the show of walking out to Joan Jett ‘bad reputation’ and being the bad girl who won’t touch gloves. That set the tempo of the fight and the end of her career 7 minutes later. She finally was Mike Tyson, at his very last fight when his desire was gone and all that remained was some reflexive memory and the intimidation of weaker competition. I wrote about this quirk of Rhona Rousey character before UFC 193 here
I wish Ronda Rousey the best and may she be humble.“Recent posts in MMA”][vc_basic_grid post_type=”6″ style=”load-more” items_per_page=”6″ button_color=”mulled_wine” item=”basicGrid_TextFirst” grid_id=”1448078852639-252c28ac-8c22-6″ taxonomies=”363″]