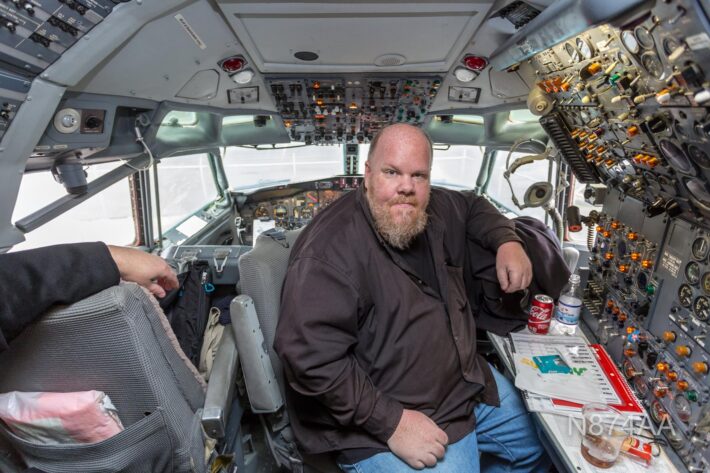 Ryan’s story starts off being born & raised down the street from the Burbank Airport (officially known as the Hollywood–Burbank Airport), in Southern California. Growing up in the mid to late-70’s, and early-80’s, his earliest memories involved ‘plane spotting’, it was truly a family tradition. His family would grab their Sporty’s Pilot Shop Airband scanner, and listen to the conversations between pilots and ATC.

His earliest memories are almost exclusively aviation related, standing in a parking lot near where PSA Boeing 727-200’s would start their departure rolls, feeling his internal organs seeming to shake, rattle and roll, as the legendary Pratt & Whitney JT8D’s were pushed to full power.

Years later, flying on a Hawaiian Air Lockheed L-1011, now at age ten or so, is what really stepped up his passion to a whole different level. He can still clearly remember arriving in Honolulu, which felt nothing like the United States that he knew. He remembers walking off the plane, smelling the salty Pacific Ocean air, admiring ‘Pualani’ emblazened on the tail of that majestic aircraft, the Lei Greeting at the Airport, and to see Hawaiian people & culture for the first time. That was a game changer, absolutely in love with the concept of air travel.

His Dad, Brian, had taken flight lessons as a young adult in the 1960’s, and considered a life of flying, but ended up opting for a steady career in the Grocery Industry. Ryan’s older brother, Jeff, followed the same path in his youth. Jeff used nearly every dollar he made working at a local Ralph’s Grocery store to become an instrument-rated commercial pilot. Some of Ryan’s fondest childhood memories were flying with Jeff to local airports, walking around the terminals of commercial airports, or flying to Santa Barbara, and having a meal at the Elephant Bar, where you would literally taxi the Piper Cherokee right up to the outdoor dining area.

At about 15 years-old, Ryan bought a VHS-C camcorder, and started to document airplanes, mainly airliners. That camcorder, along with the next generation, a full-size shoulder-mounted VHS camera, began to document now defunct airlines & planes that can no longer be found flying.

Little did anybody know at the time, this magical site named YouTube would come along, and that this older footage could be dusted off, converted to digital, and then uploaded to Ryan’s channel. He didn’t stop there, he kept advancing cameras as time went on, and got to live many lifelong dreams as a result of the channel’s success.

He’s also been fortunate enough to be invited on private jets, cover inaugural flights, fly on startup airlines & brilliant concept carriers like FLOAT (FLy Over All Traffic). His channel can be found here: http://www.youtube.com/RyanBomar