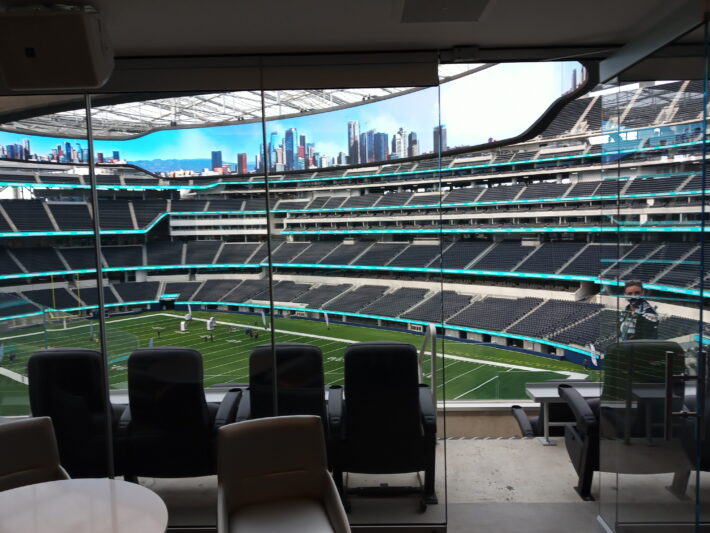 Structure. Structure is what is needed for anything that is going to reach new heights. That can be said about both SOFI stadium and what the Los Angeles chargers are doing right now building around their young star quarterback Justin Herbert. With offseason additions of Linsley, some veteran talent from the Steelers and the Lions, as well as stealing a young left tackle in this year’s draft, these make for great structure.

When I say safest public structure in California what do you think of? What should start coming to mind from now on is SOFI stadium. Now this writer is 6’8” and am referred to as a giant often, but when standing in front of the monolithic structure that is SOFI, it is incredibly humbling. Three separate free-standing structures make up the shell of the stadium. It is built in such a way (because we are in southern California) that all three structures can flex during an earthquake individually. The stadium has a triangular shape which uniquely creates 3 ecologies that support different plant life that allows a SOFI attendee the opportunity to really enjoy all the botanicals that southern California has to offer. Looking around the stadium clearly there was a palm tree budget. But more than just having more palm trees than sunset Blvd., SOFI is a model for water conservation with its desert style plants and its 76 million artificial blades of grass.

Every seat in this place is a good seat, whether it is the fifty-yard line, section 207, way up in the nosebleeds, or in one of the multiple gorgeous suites and on field cabanas. If every seat was not out of this world, you have a giant video board that even puts the Dallas Cowboys stadium TV to shame. You can watch it from the inside of the board as well as the outside. As tall as a four-story building and as long as the field. By design this giant structure casts little to no shadow onto the field below.

With OTA’s finishing up, Covid restrictions lifting, and training camp just around the corner all eyes are on Justin Herbert and his upcoming sophomore season. Last year Justin arguably had the worst offensive line in the NFL. With offseason moves the chargers made, Justin could be sitting with a top five offensive line. After last year’s 4,336 yards in a season, with missing a game mind you, he should have plenty of room for improvement. The potential of Justin making a run at an MVP also is not out of the question. Two recent recipients of the award during their sophomore season? Patrick Mahomes, and Lamar Jackson. New stadium. New offense. New defense. New season. I love the sunny weather of southern California, but don’t be surprised if you hear a lot of thunder and lightning in LA this fall.