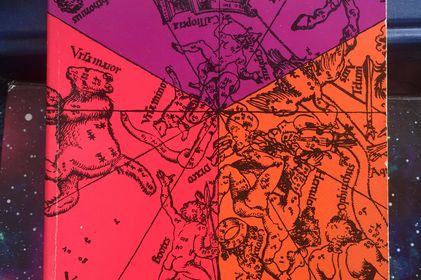 Our ultimate horizon, the furthest-away from the point of each individual I-experience (the self) is the Starry Firmament of Nuit; She is the Divine behind all forms of how human perceived and represented to themselves the Divine, throughout the history of human existence.
For, Human as such emerges through this specific relationship, this interaction between an individual soul and the vastness of the clear night sky. It’s an intimate, personal experience; and it’s universal, it stands true for every human being that has ever lived on Earth.

Astrology, that hidden grandfather of all sciences (which in unison with the grandmother, geometry, gave birth to all that we know as Science now), is a form of artful, perfected adoration of Nuit. There are patterns (that what we do know), and there’s the Unknown, and there’s the happy unison of the two in astrology. The Unknown does not become less or more not-known by our knowledge and use of the patterns that astrology reveals; the Beauty is in knowing and honoring this, all the while tirelessly calculating, measuring and defining.

Viewed in this way, all human practices and disciplines that are directly oriented to – centered on – the stars, are nothing but various elaborations of this same single ‘theme’; their basic function is to connect the human conscious mind in a structured (however narrowly specialized and limited, in some cases…) way with the Divine. They serve to help the mind gap the immeasurable gap between human and God; they are various patterns, forms, emerged naturally through the course of experience of human being; their perfection is measured by how pure & crystal-clear is their conductivity.

This book is a collection of the Names that we have given (and that have been recorded), over time, to the naked-eye visible individual stars as well as constellations.
Each name has a lore; for each star and constellation seen, human being had weaved a story. These stories have come to us from the collective mind of humanity; they are structures (reflection of motion-patterns) emerged from the collective Unconscious, crystalized into Words; they are hidden hymns of worship, sung by human heart, to the immeasurable Beauty of the vastness of the body of Nuit.

As such, the book is a small, humble monument of this worship. But it’s a hidden treasure-house: a catalog of names that mankind addressed the stars with, throughout history.

It is akin to a very long (& ever tending toward eternity) love poem – maybe the oldest and longest one there is, and yet a living, breathing poem, whose verses and words are moving, changing places – appearing in different context every time, being reflected by a light from a different angle whenever you open the book to look up a star or a constellation.

And if you vow to always use it along with physically looking up at the night sky (instead of only reading the words on paper; and/or looking at the stars via phone app), I promise: it will have many unexpected secrets to teach you!