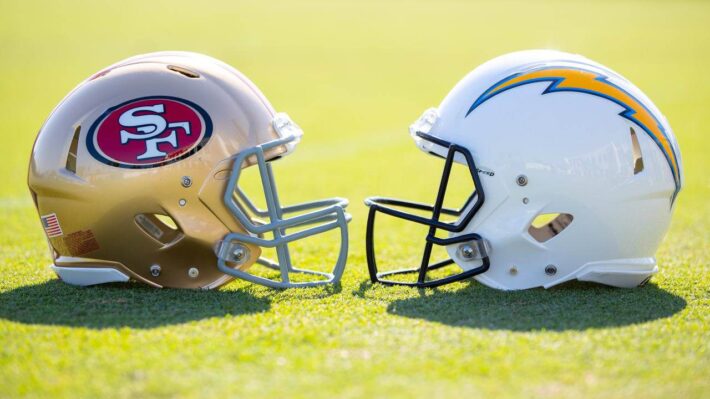 In-between two Sunday night football primetime games, the Los Angeles Chargers look to come out on top at 6-4. After the Chargers vs. Chiefs game getting flexed to Sunday night, the Chargers know the big spotlight is on them this week against two stacked opponents.

First possession of the game seemed as smooth a butter. Quick six plays and before you know it, Justin Herbert (Herbo), was slinging the rock 40-yards down to Carter in the endzone.

Now for defense to hit the buffet.

The Niners came out with a descent string of plays that placed them near the goal line. This was the right time for Niners to send in newly acquired star running back in Christian Mccaffrey. The Chargers Defense steped up in the middle and kept the Niners to only three points.

A lackluster series followed by a bump and scoop defensive recovery fumble by Asante Samuel Jr. followed by a Dicker the Kicker 48-yard field capitalizing on the previous turnover. Followed by another great defensive stop, which then turned into a blocked punt to create another opportunity for the Chargers.

The Niners found the endzone with a QB sneak and finally capitalized. then on a two-minute drill situation with the ball, you have what I would like to say, “Is the new age way of targeting.

With the instigating of the new Tua Tagovailoa Rule, it seemed that a defensive player needs to only lower their helmet to get an offensive player checked out for concussion protocol. This sucks out that momentum from the other team before the half, as well as keep the score from getting too out of hand.

I’m not saying this is what the Niner’s player did, but the situation with a new rule being put into place, plays will be heavily scrutinized especially with a hit like that and it being after the whistle blew.

As a Charger’s fan, seeing the “series” that they tried to put together with Chase Daniels at the helm, it was hard to go through halftime without knowing if Herbo was going to be coming back to the game of if this was going to be a tough one to watch moving forward. The third quarter was the Niners run game show with CMC and Mitchell tandem, accompanied with three and out for the chargers.

Losing Everett at the half was a huge loss, not to mention losing two defensive linemen at depth positions.

How the rest of the game went simply, the Niners ran clock and when we did get offensive opportunities, Lombardi’s play calling was let say far less than thrilling. The optimism out of this game is Niners were stacked with their offense and defense, and with the most injured roster in the league, were able to stay in it.

Next week we have the Chiefs in another primetime Sunday matchup. Allen and Williams should both be returning that game, and the Chiefs are down what looks like Jiu jiu and scantling and hardman. It’s going to be one hell of a game on Sunday, and as long as we execute, and Lombardi goes just a little creative, we will let our giant arm QB show what he is capable of.