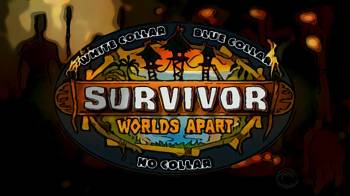 Season 30 of Survivor Worlds Apart – White Collar vs. Blue Collar vs. No Collar.
Like Zelig, I could have been on every tribe.
I am definitely White Collar, or I once was. People have seasons.
I am also definitely No Collar as I am bald head deep in an ultra athletic mid-book chapter of my life.
I have never been Blue Collar but I ‘coulda been’.  One day a kid with a very small and very distributed family and then time lapse that same kid in a suit, with black shoes and white tube socks getting a break on Wall Street. Right person, right time, right place.
I grew up in a kinda (BTW, ‘kinda’ is now acceptable in Scrabble) crazy family full of its own Survivor contestants and the season that I was in lasted 17 years.
Survivor Worlds Apart: This is the first season I can remember that everyone knows how to play the game.
Usually, the producers give us some iconography, bikinis and emotional conflict to distract from a lesser poolof combatants and to keep the whole family TV candy. They give us palookas who cant win but will provde conflict
This season everyone knows how to play the game. Some are better than others, but they all absolutely understand the dynamics, the math needed to win, the force of an alliance and the elements of luck.
This is season does not have a Sandra, who won two times by hiding in the back seat and on occasion cleverly letting others battle and being the last one standing after the carnage (note that she is an increible player, the game was different then). We don’t have a Boston Rob being gifted a win by having to play with facsimiles of reality TV stars rather than true survivor competitors.
And we don’t have Tony (one of my favorite winners) who got lucky by being selected to go the final tribal by a recruited (nice but kinda stupid) Woo.
This might be the best season of survivor ever. I don’t know yet, I will know when the season is complete next week.
There is one episode left:
The remaining players are
Will: a goat
Carolyn: amazing play in the last tribal. She didn’t want to play the idol. All players witha  free pass get greedy. But she listened to the action in the tribal and calculated correctly.
Mike: Very strong player. Won the last challenge to get immunity or else he was going home fer sure.
Rodney: thinks way too highly of himself. A goat
Sierra. Has gotten very little air time. Is she a goat? One good goat can win against two bad ones in the final tribal.
This last episode recipe: IFTTT (if this then that)
There are two last immunity challenges and no idols or advantages to be played.
Everybody is aligned to take out the strongest player.
Mike and Carolyn are the strongest social and competitive players. They can both win in the final jury.
If Mike wins immunity he takes out Carolyn and vice versa.
If neither wins a challenge they both get picked off.
Without Mike or Carolyn its a tribal of goats.
This scenario is very likely and would suck the wind out of an otherwise great season. It’s why I have only made a reservation for Worlds Apart and not confired its place.
This season may come down to a little producer tampering on the challenges. Rodney, despite his athletic appearance has not been a physical force, but if it’s the right challenge he can win it. If it’s a puzzle he shouldn’t even compete. He is not getting voted off so why strain himself and risk a lifelong injury. His mind is too shallow a lake to be throwing rocks in.
Will is another non physical/non mental force. He is not a good player, he is not a bad player. He is however a total asshole. Not a ‘I wanna see more of this person in a future season’ type of asshole like Russell – but a dicky type of asshole like someone who keys cars – type of an asshole.
Sierra is probably the biggest chance for an upset. If it’s an endurance challenge she is light and has come close many times. If it’s a puzzle she can also pull out a win.
In both types of challenges Mike and Carolyn are the favorites. But, upsetting the favorite is aspirational and can lead to big time chokes by the front runner(s)
Timing of the wins is also an issue.
Mike is at the top of the list to get voted off. He has to win both of the final challenges to make it to final tribal.
If neither Mike nor Carolyn wins the first immunity,  Mike leaves.
Carolyn doesn’t have to win the first challenge, she just can’t have Mike win the first.
Carolyn has to win the second challenge.
Sierra can win by not being Rodney or Will. It would be a shame to end the season that way, but it happens and Worlds Apart would go from a top 5 finisher to a top 10.
My pick to win it all:
Mike would have to win back to back immunity challenges and that is statiscally unlikely. He won’t win.
Carolyn she has to win challenge number 2 to make it to the final….
Sierra wins if Carolyn and Mike lose.
I pick Carolyn to win….