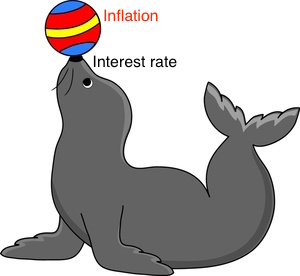 The Fed already uses this fact extensively to read market expectations of inflation from the difference between long-term nominal and indexed rates.

My modest proposal is that the Fed should (perhaps, see below) target the spread, and thereby force expected inflation to conform to its will.

A quick note to my fellow free marketers: The Fed (or some agency) has to do something. The price level is in the end our standard of value, and someone has to decide that we use feet instead of meters. Or, vice versa, but make up your mind. If we’re going to use government debt — dollars — as money, then the government has to do something to establish its value, be it set a money supply, set an interest rate, promise a conversion rate to gold, to foreign currency, or, as currently, set a nominal interest rate.  (We’ll leave bitcoin and private money for another day.) Or target the spread.

By targeting the spread and ignoring the level of rates, however, the Fed could focus on inflation control, and leave real rates to their natural market level.

One could argue whether real-rate floating is a good idea. For this post, I want to think about whether letting real rates float is possible. It’s an interesting question under a general free-market prejudice that prices should be left alone where possible. The Fed and many economists seem to lean towards macroeconomic dirigisme (they call it “stabilization” or “management”) rather than just inflation control, i.e. that the Fed knows better than markets what the right short run real rate is, and should actively control it to offset booms and busts, as it should more and more actively control bond prices, stock prices, real estate prices, and credit, even if inflation is stuck at 2%. I acknowledge that debate, but let’s have it another day. For now, could the Fed target the spread, and let real rates float?

There are many kinds of “target” and monetary economists use the same word in many different ways, in an apparent attempt to confuse outsiders. First, a target could be like the target of an arrow, the thing you aim for not the thing you control. In this sense, the Fed could use its short run “target,” or its “instrument” the nominal rate, together possibly with other “tools,” to control the nominal-indexed spread. If the spread widens, indicating higher expected inflation, then raise nominal interest rates, and keep going until the spread settles down.

That’s actually pretty much what the Fed does now, and “target the spread” means only doing it more aggressively, and focusing more on inflation and less on everything else. But, one problem, as in Michelson Morley and Occam, we’re actually not that sure about the link between short nominal rates and the spread. Perhaps to lower expected inflation the Fed should lower rates, and promise to keep them there?

So, the second, and more radical idea, which is the centerpiece of the post. Perhaps the Fed should abandon manipulating the level of short-term rates all together, and simply target the spread directly. If it wants 2% inflation, offer to exchange, say, one-year treasury bonds in return for one-year indexed treasuries at a  2% premium, in any quantity you wish. Bring in a 1% indexed treasury, and you get a 3% non-indexed treasury, no matter what the going market rate or non-indexed treasuries. And leave the interest rate alone entirely.

Better yet, the Fed will enter a swap contract between indexed and non-indexed debt at a fixed 2%. That means you can go to the Fed, put no money down (but collateral), and at the end of the year you pay them $1 plus the rate of inflation, and they will pay you $3, or vice versa.

Will this work? That depends entirely on whether the central equation

But the last 8 years of globally quiet inflation with rates stuck at zero, and Japan’s 20 years, really challenge that view. Inflation seems mighty stable with no movements in interest rates. And, modern new-Keynesian, rational-expectations theory also predicts exactly that outcome.  So, perhaps

Perhaps it is instead stable,

This is the point of Michelson Morley and Occam, which goes on for 120 pages to argue that stability makes sense.

If the relationship is stable, that means the Fed can (not necessarily should) just leave the nominal rate fixed, and let expected inflation follow, after the long run real rate settles down.

If the relationship is stable, however, that also means directly that the Fed can target the spread,  and expected inflation will follow much more directly, allowing the real rate to float up and down as it wishes. (This implication is not in the current draft of Michelson Morley and Occam, because I worried about too much apparently crazy stuff in one paper, but it will be in the next one.)

You can also think of targeting the spread as a modern version of a gold standard. We understand how a gold standard works: The Treasury promises 1 oz of gold for every X dollars (X used to be $32). If that promise is really firm, that alone sets the price level and we don’t need a Fed, at least for the purpose of setting the price level.

Gold won’t work in today’s economy. It would work for the Fed to operate Fed-Mart and offer to buy and sell the entire basket of goods in the CPI in return for dollars. But that’s impractical too.

There is also nothing magic about 2%. If like me you prefer 0% inflation, then target equality between indexed and non-indexed debt. If like me you like a price level target, then the spread target must rise and fall to bring the price level back to its immutable constant. If you like more inflation, set the target higher. However, the dynamics of stability suggest that really rock-solid expectations about the future spread target are vital. Discretionary raising and lowering of the target will destroy its stability.

On the other hand, if the relationship is unstable, activist targeting the spread rather than the level of short rates could also work. If inflation rises, then rather than keep the spread the same, the spread could rise. The spread Taylor rule could be

The only difference is whether we center the Taylor rule at the market indexed rate or the infamous r*.

For the rest of the post I’m going to pursue the idea of stability, though, and the possibility of directly targeting the spread to equal the inflation target.

Some important caveats, in addition to the obvious one that we should wait to really be sure that the relationship is stable not unstable. (No, if I were Fed chair I would not do this tomorrow. I wouldn’t even be writing this post!)

One obstacle is that TIPS are illiquid, spread out over many maturities, and suffer a complex tax treatment that makes them poor indicators of expected inflation. The TIPS-Treasury spread went nuts like many other things in the financial crisis. This proposal requires a much larger and more liquid TIPS market. To some extent using swaps rather than actual TIPS will help. But only big banks use swaps, and we really want everyone thinking about inflation. It would help a lot for the Treasury to issue better, more liquid bonds, including better designed TIPS, the functional equivalent of reserves, and swaps that we can all access at treasury.gov. I outlined some ideas in a new structure for federal debt. Similarly, TIPS pricing like all bond pricing involves risk premiums as well as expected inflation. For this purpose, I judge it to be a minor issue, but that is a very superficial judgement and needs investigation.

Second, all monetary arrangements, and this one in particular, need much more attention to fiscal underpinnings. A gold standard does not depend on gold reserves, it depends on everyone’s belief that the government has the power and will to borrow gold if needed, and to commit tax revenue to pay back that borrowing.

The spread-target policy also requires solid fiscal backing. A commitment to trade large quantities of indexed vs. nonindexed bonds, or to engage in swaps, clearly is a fiscal commitment. That is, deeply, how it works. If the government — Fed + Treasury — starts losing a lot of money on its inflation swaps, it will raise taxes or cut spending to pay off those debts. This fiscal contraction, ultimately, lowers inflation.

One might say therefore, that the Treasury rather than Fed should directly implement the target, offering to buy and sell bonds at fixed spreads or offering swaps at fixed prices, just as the gold standard was part of the Treasury to make clear it’s commitment to find the needed gold.

I’m not sure that is necessary. Our current Fed’s target of the nominal interest rate similarly pegs the level of the interest rate on all US government debt, and the Fed is taking on large fiscal commitments in its QE operations. If the Fed can peg the level of the nominal rate, it can likely peg the spread. But there is a backstop fiscal commitment from the Treasury that needs attention. If the Fed takes on a lot of swaps, and inflation rises anyway, the Treasury will have to make good on it, just as the Treasury will have to bail out the Fed if the Fed’s mortgage-backed securities go bust or if interest rates rise too fast. And, the Treasury’s commitment to make good on it is what stops inflation from happening in the first place. “Do what it takes” needs a big stick in the background. That the fiscal foundations of our current monetary arrangements is shaky is pretty obvious.

It is also not obvious that a floating short-run real rate is desirable. In the long run, there is nothing the Fed can do about real rates, the famous r*, because they are set by savings, investment, the profitability of capital, and so on. In the short run, it is felt, monetary policy affects real rates because prices are sticky. Conversely, then, a floating real rate will be influenced by “sticky” prices and wages. Adam Smith principles of the desirability of free floating prices don’t necessarily hold when prices are sticky. I’m personally skeptical that our Fed can determine the “right” real rate better than markets, as nobody really understands “price stickiness,” but there is a case to be made that the Fed should smooth real rate fluctuations.

But first, let’s figure out whether a spread target, i.e. an expected-CPI standard, is possible.

Finally, let me be clear this is meant to provoke discussion. Many economists like to jump from their last working paper to policy prescriptions. I’m much more reserved. Any radical idea for policy should first be written, then published in peer-reviewed journals, then dissected, then distilled, then analyzed by the general class of thinkers and commentators, and finally when well accepted make its way to policy. We’re still in that process, apparently, for the benefits of free trade and whether national income identities should inform trade policy. So, no, if by magic I woke up as Fed chair tomorrow, not even I would implement this overnight. But I do think we are much less sure about how monetary policy works than the illusion of technocratic expertise emanating from the Fed suggests, and that uncertainty should affect policy today.

But the weight of evidence and theory in favor of stability seems to be stronger, the attraction of a “standard” that can work in modern financial markets is strong, so it does seem an idea worth putting through that process.
2017/03/target-spread.html