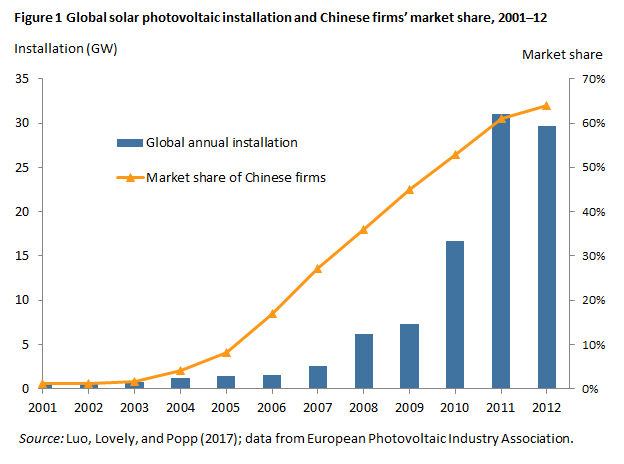 The Trump administration has placed a high priority on investigating alleged Chinese efforts to steal intellectual property by forcing US companies to share their secrets if they wish to do business within China. In August, with great fanfare, the administration invoked Section 301 of the Trade Act of 1974 to open that investigation, signaling its willingness to impose penalties on China if it is found to have engaged in unfair practices.
Overlooked in the focus on direct investment, however, is another major effort that China uses to acquire technical information: repatriation of Chinese citizens able to bring home knowledge and skills acquired in foreign companies and on foreign campuses.
Recruiting highly skilled returnees is a strategic goal emphasized in three Chinese national plans: for scientific and technological development (2006–20), human resources development (2010–20), and education reform and development (2010–20). This form of technology transfer is complemented by other tools of China’s development strategy. Intellectual returnees are encouraged to start their own businesses through provision of special incubators, tax cuts, and access to permanent residence in desired cities. Xinhua reports that 350 industrial and science parks constructed exclusively for the foreign-educated currently house over 27,000 enterprises. Such policies operate in a legal gray area, since laws governing technology transfer are vague or nonexistent.
An important question for US policymakers is whether such efforts are effective in transferring technology to Chinese firms. While studies of the efficacy of repatriation policies for technology transfer are few, recent research finds that such policies were effective in promoting innovation and upgrading in the silicon solar (photovoltaic, or PV) industry and may have contributed indirectly to growing trade tensions with the United States.
Development of China’s PV industry paralleled efforts by the government to encourage repatriation of Chinese citizens who studied or trained abroad. Intellectual returnees played a crucial role in bringing to China the technology and techniques needed to produce for export. Pioneers in the industry are the well-known “three returnees of China’s photovoltaic,” Huaijin Yang, Zhengrong Shi, and Jianhua Zhao. These three men, originally from the Jiangsu province, studied photovoltaic technology in Australia in the 1990s and then returned to China with advanced technology and foreign capital to start firms. Further flows of intellectual returnees provided experienced engineers, investors, and managers as the industry grew (Luo and Yu, 2012).
The trajectory of China’s PV industry suggests that attracting and retaining world-class talent can advance industrial capacity in ways that move global markets. China’s share of global PV production rose from 1 percent in 2001 to 65 percent by 2012, as shown in figure 1, even as global installations of solar equipment rose rapidly. China is now the world leader in cell production and module assembly, segments with relatively low technical barriers to entry and low industrial concentration.

In a recent paper, Siping Luo, David Popp, and I provide evidence consistent with technology upgrading through the repatriation of foreign-trained talent to China’s PV industry. Specifically, we estimate the relationship between original innovative activity in Chinese PV firms, measured by patent applications, and the presence of corporate leaders who studied or trained in an economically advanced country. The study uses detailed data on PV firms, the life histories of their top management teams, and their patenting activity.
The research findings suggest that intellectual returnees both improve a firm’s innovative capacity and provide spillover effects to neighboring firms. They are thus an active channel for technology transfer and upgrading. Quantitatively, the estimated effect of experienced leadership is large: Firms whose top executive has international experience have about six times more patents than other firms. Similarly, having a member of the top management team, such as chief operating or technical officer, with international experience increases patenting by a factor of two. Moreover, firms with intellectual returnees in leadership roles have higher research productivity in that they produce more patents for a given research and development investment.
Additionally, because firms in the photovoltaic industry are located in many jurisdictions, only some of which target the solar industry for development, we are able to show that local industrial policies spur patenting. Further evidence suggests, on the other hand, that local market-oriented reforms deter patenting. While the channels through which pro-market policies deter patenting in the industry are unknown, this finding is consistent with an important role for activist policies in the Chinese PV industry’s success.
The “brain circulation” from repatriation is sure to influence China’s ability to compete in high-tech and newly emerging sectors for years to come. However, the brief history of silicon solar suggests caution for developing countries seeking technology transfer through intellectual returnees. First, the potential for trade conflict is high when emerging economies rapidly gain traction in high-tech sectors that developed countries consider their own by virtue of original innovation. After the rapid rise in the Chinese market share, both the European Union and the United States placed antidumping and countervailing duties on imported solar panels and cells from China. And by early next year, President Trump will decide whether to impose “safeguard” tariffs or quotas on almost all solar panel imports.
A second caution from the history of the PV industry warns that domestic taxpayers may never reap the benefits of public expenditures used to lure highly skilled individuals back home. A main subsidiary of Suntech Power, one of the world’s biggest solar panel makers, declared bankruptcy in March 2013. Its founder, Shi Zhengrong, was an overseas scientist with Australian citizenship who held several patents before deciding to return to China. The city of Wuxi is unlikely to recoup its initial $6 million investment in his company.[1] A final caution relates to the fine line between technology transfer via intellectual returnees and intellectual property (IP) espionage. Chinese innovative activity in silicon solar is genuine, as evidenced by the granting of patents for indigenous inventions from both Chinese and international patent offices. Nevertheless, as more scientists return home with human capital acquired in technologically advanced economies, resolving intellectual property conflicts within a weak global IP protection architecture will grow more challenging.