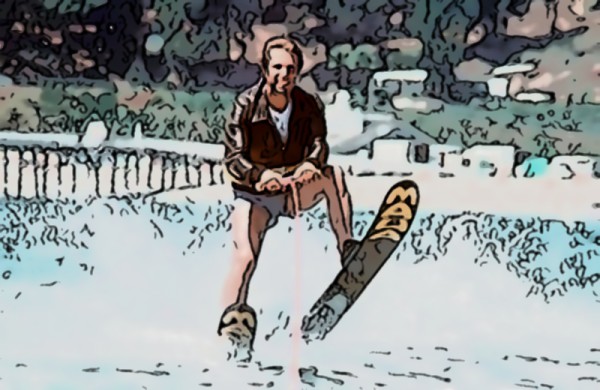 This is the worst Presidential election in my lifetime. And, it is the worst election in your lifetime also.
I was 11 years when the Fonz jumped the shark. That watery and upsetting episode was the marker for ‘before and after’. It continued to run for years but I don’t remember ever watching it again.
Politics is as an industry, so when I use the word I am referring to its entirety. The theatrical and the spectacle, the issues, the candidates, the apparatus used to get them elected (or not) and the ‘humanness’ – the emotional elements that tethers people to a candidate or a cause, and to each other.
This political season is different. It has jumped the shark.
We are a generation past the wedges of Terry Schiavo, Gay and Transgender rights, Creationism vs Science and union busting. This election is Happy Days past its peak when the only watchers were the TV junkies, the Happy Days hardcore or whatever new fans the allure of Ted McGinley as ‘Roger’ could entice. Chachi and Joanie, Richie Cunningham and most of his gang were gone.
The Republicans have been in a constant war since Reagan left office. They have been very creative in finding opponents.
The Tea Party is the weapon they unloosed upon themselves. It is more proof that a gun kept in a home is most likely to be used against its owners.
The appeal of Donald Trump is that he is well manicured and dishonestly coiffed anarchist. He is the imitation game and a contemporary Horatio Alger short story, Trump went from rich to richer, isn’t that what makes America great? But, as a sidenote, Trump hasn’t disclosed his tax returns or given any real showing of his actual finances, wealth, assets or interest. He is either beholden to no-one or to everyone.
Trump appeals to that same voting block that may, or may not have, voted for Bush v. Gore.
The Trump cypher is immigration. He feels that one of the greatest problems with America today is that our borders have changed. It means’ immigration but it also means a restoration of the reconstruction era, when business was unfettered by labor laws and regulations.
The Republicans are outraged, outraged i tell you! – that NBC had the gumption to ask questions of a POTUS candidate. They were so outraged (outraged I tell you) that they held a committee of the candidates and their proxies to influence the moderators and questions.
Republicans don’t want to answer questions because its none of the voters fucking business.
They don’t want us to vote for a candidate based on a schematic to make America a better country. Instead they want the voters decision to be simply a stylistic one. Whose haircut, style of clothing, tint of skin and colloquialism do you like the most?
The Democrats are fortunate and/or burdened with a great candidate who mysteriously is the only serious contender the Dems have, and that in itself weakens her. People, even legacy Democrat voters want a choice. We may choose ‘her’ but let us decide. Instead she is a magician forcing an audience member to pick a certain card. We already know the outcome.
Before the Fonz jumped the shark we talked about the draft, but now that conversation is taboo as we may or may not have lost the last three wars. We talked about transparency in government, but when we opened up the Senate doors we created a new breed of super lobbysists who got to see their money at work and the votes cast, so now we can never talk about shutting those doors ever again. We talked about National debt in real terms, not in comprimising the social contract with its citizens. We talked of defense expenditures, but now every time we do the military and all its agencies make sure that we are reminded of the lurking dangers. It was only a few years ago we were talking about rebuilding the infrastucture of the US (bridges, dams, electric grid, highways, water, etc.,) and now that is not only undiscussed, it is unafforadable.
If we aren’t always asking ‘why’ we reduce elections to a cook-off.
The last few years have added new concepts such as the ‘internet of things’ but other concepts have been crowded out, this election has no political or social discourse. It is not an election, it is a shopping spree.
Hopefully this election cycle is the anomaly, if not then we have embraced a future. Voters have been converted to George Jetson. We are the hapless workers of Spacely Sprockets. Our adversary is the cruel Cogswell Cogs. We press buttons all day for a living. They are all important buttons, every single one matters. Or maybe not.