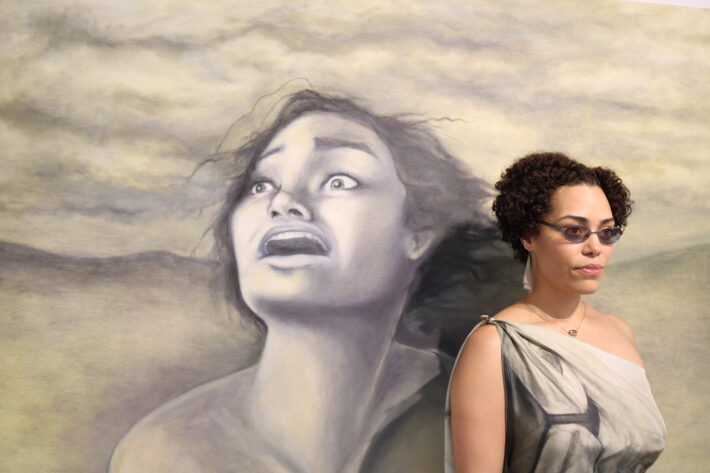 You could feel movement in every piece although somewhere at a placid still on a canvas. Each piece dripped with emotion. Pain. Pain. Angst. Horror. Misconduct. Beauty.

The debut of ‘The Fallen Woman’ by L.A. based artist, Sensie, in her first solo exhibition was held at the Sow & Tailor Los Angeles gallery on Sept. 18. The stark white walls and floors allowed for the drawing, painting and animation to create their own color for the space.

Walking in, the room was already occupied with observers, still they were, in front of every piece of artwork. Me, myself, camera in hand was immediately impressed by what I was seeing. A linen line was hung and casted halfway across the right hand corner of the first room. On it was hung a white and beaten sheet. This was utilized as a projection screen for Sensie’s animated video. Although it was not easy to make out exactly what was happening in the animation; the projection was very faint, it didn’t fail in its purpose. Along the side of the sheet hung a white and weathered dress and shirt. Walking past this revealed a mural that clammored two adjoining walls. Drawn on it was a pack of large, raging pit bull dogs.

It felt as if the linen line was shielding the danger behind creating a certain vulnerability. Easily lifted or walked around.

Walking further into the next room, hung to the left was a large painting of a woman with the face of agony. Each stroke, I swear, you could just not feel the wind in the depiction, but you could feel the outcry of pain. It’s that moment when you just can’t take it any longer and have to cry out. The woman in the painting was screaming to the heavens. She had been tarnished not by herself, but an outer source.

The animation showed a Black woman only clothed in a white tank top and briefs. She is then ravaged by dogs (Pit Bulls)–fighting them off, fighting for her life. Her rescue comes in the form of birds that lift her up with their beaks by her clothing, exposing her breasts. Her head tilts back as she looks to the heavens as she is raised off the ground and away from danger.

“Sensie expands upon her animation background to bring the stories alive, emphasizing scenes in large-scale oil paintings, zooming in on certain expressions in film-noir-inspired charcoal drawings, and giving the audience deeper insight with accompanying written pieces. On view until Oct. 23, The Fallen Woman presents an undoubtedly unique array of works which pierce straight through to the heart, telling a story of love, loss, and chaos in a young woman’s life.”

The expanse artistry that exposed the femininity and strength of woman, was truly shown with Sensie’s: The Fallen Woman. The audience was taken aback from what I had witnessed; each one not viewing any piece for less than five minutes, instead, “zombied” in awe. I was as well.

Sow & Tailor is proud to present The Fallen Woman by Sensie, the artist’s first solo exhibition at thegallery, on view from September 18 to October 23, 2022. An opening reception for the artist will be heldon September 18th from 12 – 4 PM.