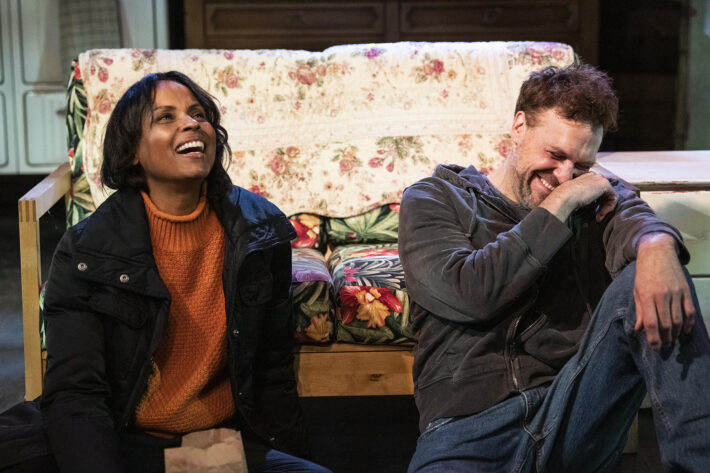 The debut performance of ‘Lost Lake’ at the Beverly Hills Playhouse on September 23 was nothing less than a complete success. Playwright done by David Auburn and directed by Faye Viviana, ‘Lost Lake’ beamed with two amazingly strong actors, Lisagaye Tomlinson (Veronica) and Craig Bachmann (Hogan), that carried the audience in this intimate and relative plot of loss, pain, confusion, loneliness and gaslighting of oneself.

A single mother, Veronica–a city woman– looks for solace in a cabin by a lake with her three small children. A heavy brow strung to her face throughout the play. Something has happened and the audience is left in the dark for sometime. Hogan, the landlord of said cabin, a country boy with a boyish grin and the same wit, plays with great complexity. Almost mimicking that of the famous childhood fable ‘The City Mouse and the Country Mouse’, neither characters seeing eye to eye, at first … I don’t want to release too much information. This makes for great humor.

The movement and progression of development with each act was divinely seamless. Two actors, one stage and only one room raised one hell of a story that many could relate to. The duality between the actors was blatey performed in the first two acts but as the play progressed, it slowly melted to an understanding between them. A slow progression that was perfectly felt by the rest of the audience; it all felt so real. Tomlinson and Bachmann never broke the fourth wall, using the front of the stage to cast it out even further, this allowed the audience to be submerged into the story even more.

It’s true to say that the richness and score of not only the play but the talent of Tomlinson and Bachmann is one to be rivaled not only in live action but the Golden Screen as well. I see them both reaching further than the stars with such talent.

The play ‘Lost Lake’ made an impression on everyone that was in attendance and you would be completely missing out on this acted and honest masterpiece of human emotion.

A great shout out to the cast and crew for a wonderful performance: