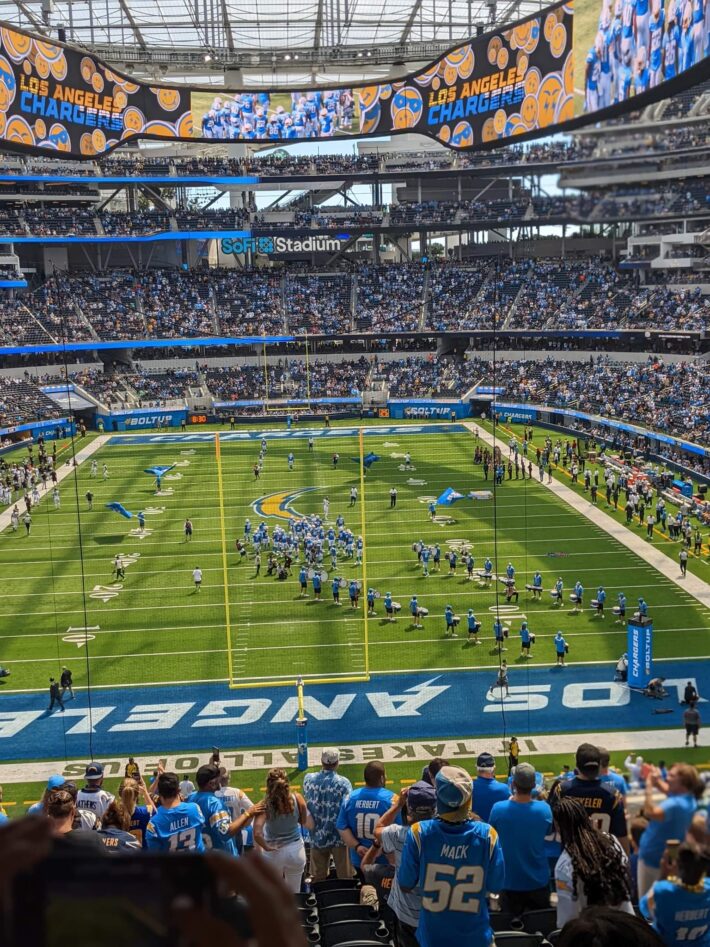 I want to give a giant shoutout to the guys over at Beta Theta Pi–one of USC’s faternities–for having me over at their tailgate spot in ‘Thunder Alley.’ Great food, amazing people, complete with beer bongs out that were calling my name. If you have never been tailgating through ‘Thunder Alley’ before a game, you are missing out. The friendliest people you will ever meet, that if needed, would give you the shirt off their back or a taco from their plate. It’s magical being around so many people of just one franchise fanbase. You truly immerse yourself into the fandom that you call home.

Now, to start this game against the Jaguars–due to injuries–the Chargers were missing the following: Allen – hamstring, Jackson – ankle, Linsley – knee and Herbert – ribs.

Now, there is no such thing as an easy win in the NFL–let’s just be real–but even with where the Chargers were at this past Saturday, we were optimistic about the outcome. From the start of the morning, the biggest question was would we be starting Justin Herbert or start veteran backup quarterback, Chase Daniels. Early reports were that Justin Herbert was going to be a “game-time” decision. There was a false report that had Justin Herbert had become an “Inactive” for the game. But, low and behold–during the player’s introductions–Justin Herbert was slated as the starting QB. Once this was announced, the stadium lost their minds. “Our guy” was going to give it his all and we were all behind him.

Several things were not connecting on Sunday for the bolts. Our running game on Sunday, and pretty much this whole season, the Chargers have not really been able to dig their heels in and get going. Now is that because of skill set at the running-back or is it because of bad play calling by Lombardi? Either way, it’s not getting anywhere even with the addition of Sony Michel this Offseason. Our passing game, besides a solo touchdown to Mike Williams, was atrocious. To be fair, that’s expected when your star quarterback can’t rotate with his full range of motion. Even when trying to attempt short-quick passes, the Chargers just couldn’t find the right combo to get any kind of traction.

After already starting the contest with a four of players down, we lost the following players during the game: Joey Bosa due to a groin injury, possibly going to be put on injured/reserve 3+ weeks out, Guyton due to a acl tear out for the season and Slater due to a ruptured bicep out for the rest of the season as well.

The biggest thing at this point with a long arduous season ahead is, to sit or continue playing Justin Herbert? My thoughts at this point would be to sit him. These next two games are away meaning there will be travel involved along with the recoop process. Is this is an injury that will heal fast or slow, and if we have an oppurtunity right now to do some line reworking while having a QB at the helm that we dont necessarily mind taking a hit or two. I say lets do it! We can come back and try to make a run with the remaining time. Only three games into a 17 game season leaves plenty of optmism left. The urgency is growing faster and faster. Tough descisions have to be made. I believe Joe Lombardi is on the hot seat and follows close behind is Coach Staley.

Our next game is on the road against the Texans.

Lets hope that some of those desicions are made and we can pull off a road win and stay in the tight close race that is the AFC West.