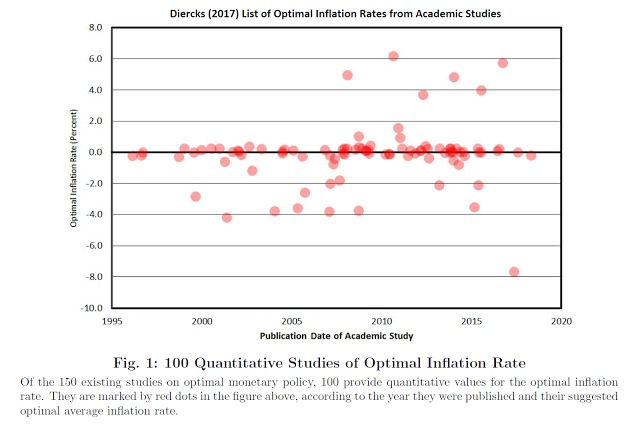 Anthony Diercks has a very useful review of the the academic literature on the question, what is the optimal inflation rate? He includes 150 papers, ordered from low to high inflation.

Broadly speaking, we start with the Friedman result that the optimal nominal interest rate is zero, so the optimal inflation rate is the negative of the real rate of interest. The optimal nominal interest rate is zero, so people feel no incentive to economize on money holdings, or devote effort to cash management, paying bills late and collecting early. Many sticky price models suggest an optimal inflation rate of zero, so you don’t have to change sticky prices. Then,
Most all of the studies that have found a positive optimal inflation rate have been written in the last ten years. The increase in the number of studies with a positive optimal inflation rate can be explained predominantly by the rise of two modelling features: (1) inclusion of the zero lower bound and (2) financial frictions.
The zero bound means the Fed may want some headroom, a higher nominal rate in normal times. (More on that issue in an earlier post here).
Then, economists get creative. Anthony provides a nice list of additional ingredients that have appeared in the literature:
Previous studies have outlined a deviation from strict inflation stabilization for some of the following reasons:
• Money (opportunity cost of positive interest rate)• Distortionary taxes (inflation can be shock absorber to reduce tax volatility)• Govt. transfers (represent pure rents that inflation can conscate)• Sticky wages (stabilize wages rather than inflation)• Price and wage markup shocks (cost push shocks)• Zero lower bound (inflation reduces chances of reaching ZLB)• Capital accumulation (composition of demand between investment and consumption matters)• Flexible prices (no costs associated with inflation)• Foreigners demand for domestic currency (inflation generates seignorage)• Price indexation (reduces costs of inflation)• Collateral constraints (prevents borrowers from smoothing the way savers do)• Endogenous firm entry (higher entry costs reduce number of firms but increase desired markups, inflation lowers markup and discourages welfare-inefficient entry)
I would add a few of my favorites: 1) Optimal taxation principles say not to tax rates of return. The tax code is not indexed. At low inflation, and low nominal interest rates, inflation-induced taxes on dividends and capital gains are reduced. That suggestion leads to zero or negative inflation. 2) I favor a price level target, not an inflation rate target, meaning that any unexpected inflation is eventually squeezed out. Among other advantages, this reduces the risk of long run contracts, and would reduce the inflation risk premium in long term bond yields. Others like it or nominal GDP targets because it provides more extended countercyclical stimulus. (There is a big literature on the latter issues. Anthony excluded it rightly, being on other questions.) There are more papers to be written.
This is a hot topic, as you can see. The Fed is thinking how to adapt to lower real interest rates. The blogosphere and commentariat are echoing more calls for the Fed to raise the inflation target. Some of this seems to reflect a resurgence of belief in the 1960s era static Phillips curve, that a higher target would lead to a permanent stimulus. Discredited economic ideas never seem to really die.
Anthony closes with
Overall, the goal of this survey is to act as a definitive resource that policymakers around the world can use to evaluate their inflation targets going forward. Furthermore, it will provide the general public with a justification and understanding of the 2% inflation target.
The former is laudable. The latter seems wishful, though necessary given Anthony works for the Fed. I think this survey has the opposite effect: it makes clear just how thin the scientific understanding behind the 2% mantra is, just how much our central banks pulled 2% out of a hat and then repeated it over and over again until it seemed carved in to stone. The Fed’s mandate is “price stability,” not “2% inflation.” It is also a nice reminder of the difference between academic and policy writing. A good academic paper focuses on one mechanism and really understands it. Policy makers have to find an optimal inflation rate that balances 150 different mechanisms. And counting.
But do not take that as criticism. The optimal inflation target is likely whatever the inflation target is. Most of the function of a target is to be a rock of stability. 0%, 2%, or 4% would each likely work as well as the other, but constant rethinking of any target would not. The point of a target is to “anchor expectations.” The “justification and understanding” should not be that 2.000% is precisely optimal. The justification and understanding is that the Fed picks one number and sticks to it. My main complaint about many people who want a higher target, or a price level target conveniently backdated to the pre-2007 trend, is the sneaking suspicion that this is just about current stimulus and they will want a lower target or to abandon the price level commitment later. (Where were you when the price level or NGDP target said to lower inflation?) The inflation target should not respond to current policy concerns. Inflation targets are like constitutions — change them infrequently,  and only for very good reasons.
If you think Anthony is missing an important and relevant paper, put the citation in the comments. This paper is special for its attempt to be comprehensive. But keep it relevant — the paper should have a qualitative answer to “what is the right long-run inflation target?”