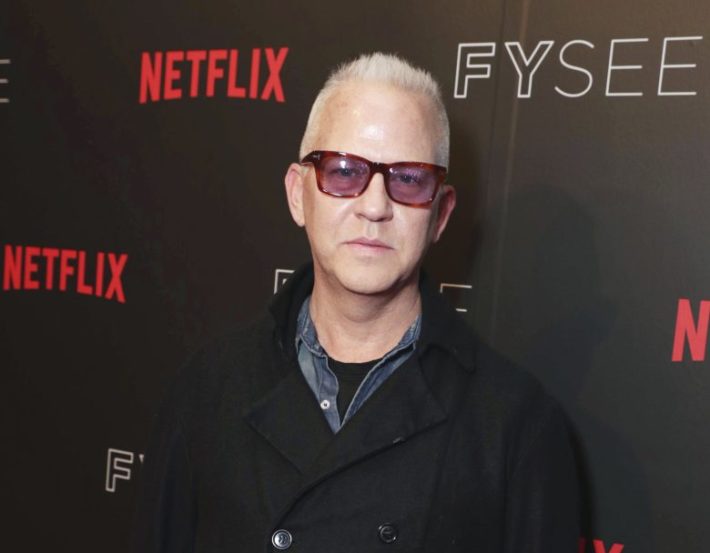 A star on the Hollywood Walk of Fame was unveiled Tuesday honoring Ryan Murphy, the six-time Emmy winning creator of such television series as “Glee,” “American Horror Story” and “Nip/Tuck.”

“I look at this star as the halfway point in my career,” Murphy said in the late-morning ceremony in front of the Hudson Hollywood Apartments on Hollywood Boulevard. “I’ve done a lot of work and I’ve been so lucky, but I have so much more to say and to do. I’m blessed. I know that. I’m excited with what’ to come.”

Murphy recalled his 1989 arrival in Hollywood from Washington D.C. in a “broken-down used yellow Subaru with under $100 in my pocket and I didn’t know a single soul.”

“All I had was a dream that I would be somebody someday,” Murphy said.

Murphy said that in his first week in Hollywood, his car ran out of gas across the street from the site of his star because “I had to make a decision of gasoline for the car or styling gel.”

“And of course, I chose the styling gel,” Murphy said.

Murphy was preceded in speaking by actresses Jessica Lange and Sarah Paulson, who have appeared in multiple projects produced by Murphy, Murphy’s producing partner Brad Falchuk and actress Gwyneth Paltrow, who appeared on “Glee,” where she met Falchuk, who she married this year.

“Ryan Murphy is one of the most creative and brilliant minds in television,” said Ana Martinez, producer of the Hollywood Walk of Fame. “His shows open the doors for people to see things they may have never thought of and invites viewers to his world of exhilarating programming.”

Murphy was born Nov. 30, 1965, in Indianapolis and is an alumnus of Indiana University. He was initially a journalist, writing for such publications as the Los Angeles Times, New York Daily News and Entertainment Weekly.

Murphy began his entertainment career by selling a script to Steven Spielberg titled, “Why Can’t I Be Audrey Hepburn?” which has not been produced.

The first television series Murphy created was “Popular,” a teenage comedy-drama that aired on The WB from 1999-2001. The next show he created was “Nip/Tuck,” a drama about plastic surgeons that ran on cable’s FX from 2003-2010 and brought Murphy the first of his 29 Emmy nominations, receiving an outstanding directing for a drama series nomination in 2004 for the series pilot.

Murphy then created the Fox musical comedy-drama about a high school choir “Glee,” which ran from 2009-15. It was nominated for outstanding comedy series each of its first two seasons. Murphy received the first of his six Emmys in 2010, winning for outstanding directing for a comedy series for the pilot.

Murphy won an outstanding directing for a miniseries movie or a dramatic special Emmy for “The Assassination Of Gianni Versace: American Crime Story.”

Murphy’s other Emmys were for producing the outstanding made for television movie, “The Normal Heart,” in 2014 and outstanding short form nonfiction or reality series, “Inside Look: The People v. O.J. Simpson: American Crime Story” in 2016.

Murphy is also the creator of the FX anthology series “American Horror Story” and the Fox procedural drama “9-1-1.”

Murphy’s next television project is the Netflix comedy “The Politician,” set to debut in 2019, with a cast including Lange and Paltrow.