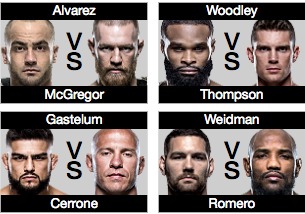 Every sports event has people who are convinced, and occasionally convincing, that they predicted the outcome.
I am time stamping my predictions for UFC 205, I’m not gonna give a whole analysis or the forensics of  how I came to my guess, because it just doesn’t matter. Either something happens or it doesn’t.
Here goes:
Miesha Tate defeats Raquel Pennington by decision in early rounds. I’ll take under round 3
Donald Cerrone defeats Kelvin Gastelum by KO in early rounds. I’ll take under round 3
Yoel Romero defeats Chris Weidman by decision in very early rounds. (note I am not happy with this prediction cos i like Weidman and dislike every pharmaceutical molecule of Romero)
Stephen Thompson defeats Tyron Woodley by decision
Conor McGregor defeats Eddie Alvarez by KO round 3 or early in 4th
Lastly there are some other fights on the card that are interesting to me. I pick Frankie Edgar to KO Stephen Thompson and Khabib Numagomedov to decision Michael Johnson.
Those are my picks for UFC 205.
If I’m right I gloat and point disbelievers to this page, If I’m wrong…I don’t