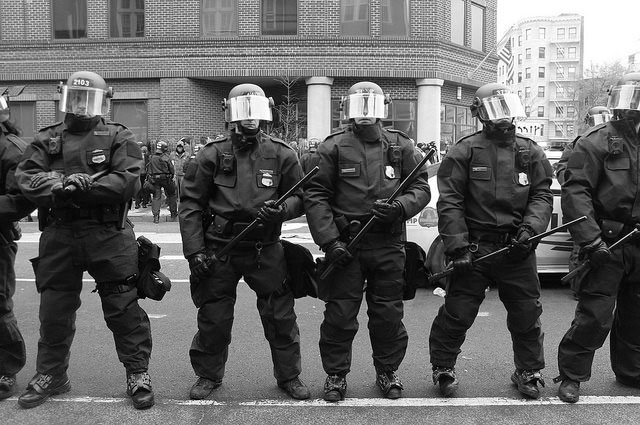 Riot police stand in front of protesters at the inauguration for President Trump in Washington, DC, January 20, 2017. (Photo: Shamila Chaudhary / Flickr)
The President of the United States issued a proclamation on Monday, dedicating the week to law enforcement officers.
Although communities across the nation are agitating for police reforms in response to an endemic of lethal force use — more than 960 people were killed by officers in 2016 — President Trump alleged cops deserve better treatment from society.
“I will make it the personal priority of my administration to ensure that our police are finally treated fairly with honor and respect that they deserve,” Trump told a crowd assembled for the National Peace Officers’ Memorial Service in Washington, DC.
“You are the thin blue line between civilization and chaos,” he added.
The President went on to claim, “We are living through an era in which our police have been subject to unfair defamation and vilification.”
“It is time to work with our cops, not against them, but to support them, not to obstruct, which were doing,” he added without elaborating in what ways the nation’s law enforcement is being restricted.
During a signing ceremony earlier in the day, Trump issued a proclamation recognizing officer deaths, and calling on the Department of Justice to “develop a strategy to better prevent and prosecute crimes of violence against our federal, state, tribal, and local law enforcement officers.”
In February, he signed an executive order pushing the DOJ to explore federal protections for police. The action also implored the department to recommend new mandatory minimum for crimes against law enforcement.
In each case, the President has alluded to increasing violence against cops — a claim not backed up by the data.
The number of slain officers every year has fallen dramatically since its peak in the 1970s, according to figures from the National Law Enforcement Officers Memorial Fund. Last year, 143 officers were killed on duty, down from the 159 who died in President George W. Bush’s final year in office. It’s significantly lower than the 280 police deaths reported in 1974.
In just his first few months in office, President Trump and Attorney General Jeff Sessions have broken the momentum for any police reforms directed by the federal government.
Sessions has moved to restore harsh mandatory minimum sentencing on non-violent drug offenders. He has also signaled that his department would ease up on local police forces were caught engaging in systemic abuses by the previous Obama administration’s DOJ.

the contributors of TruthOut, a great site that I support and so should you! http://www.truth-out.org/news/item/40597-trump-claims-cops-are-obstructed-subject-to-unfair-vilification [