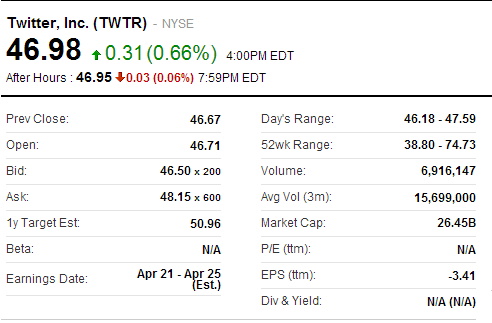 Twitter. Still not buying
This is a follow up to a post I wrote before the Twitter (TWTR) IPO,  Twitter Buyer Beware
Twitter has now been public for long enough to give some commentary to its trading.
Its first earnings conference call was received with the pomp usually only afforded a company with an unblemished record of upbeat earnings. It was a ‘gentlemanly’ affair, not what you would expect from a company that is in fact, a publicly traded startup, without a viable business model, with ad revenue rates eroding rapidly.
Analysts need love too. They are not going to go on the offensive during a gold rush to bring companies public, an enormously profitable business for their bosses, the underwriters, who also maintain an inventory in the stock.
I suspect, that once their obligations have been satisfied and the firms have lightened their position they will finally feel compassion to share their sentiments to those outside their inner circle.
TWTR style – 144 characters or less:
a)    The underwriters were greedy and left little crumbs on the table
b)    I expect TWTR will trade in a bandwidth, perhaps 42 to 60, that’s a wide band and permits astute traders to make money
c)     Announcements and favorable analyst gibberish may pop the stock, but it won’t be sustainable
d)    Mutual (and hedge) funds will not want to take a large inventory of the stock. Instead they will be very quick to move the stock in a flurry like three card monte
e)    Mutual/hedge funds trade quickly and will create wild swings, leave it alone. Buy when the risk can be quantified
f)      Most momentum traders lack discipline to sell when trade either works/ turns sour. They rationalize and try to create a logic
g)    Wall Street trades on anticipation, the sentiment is wait. Why fight the tape?
h)    Hedge funds worry: TWTR might be a very short history. Epic losses and it could be tomorrows shell company, today
i)       Recent/filed IPO’s maybe a leading indicator that the appetite of buyers is being satiated
j)      A few more KING like IPO’s and indigestion may become deadly
k)     TWTR can’t make big bets. Their currency (stock) is Bitcoin-ish
l)       Cory booker (et al) is an unpaying advertiser. Charge him for the mailings he ain’t sending
m)  Social cache of owning TWTR: How much are you willing to pay to join this unremarkable private club?
n)    AMZN financed themselves with debt/accounts receivables ‘type’ financing. TWTR does not have enough reliable ad revenue to do this
o)    FB is making giant bets. They want to own the inside of the refrigerator when the door is shut and the things that go bump in the night
p)    TWTR cant make strategic/lon range acq’s until they make/assimilate short term buys/tweetdeck
q)    Amazon, Apple, Google, (even BOX) all have so many more levers. Twitter has so few. Tsk Tsk