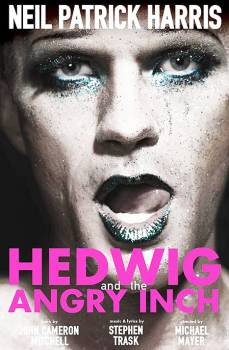 Hedwig and the Angry Inch – My Review of the Broadway Debut
I am now at an age where I should be indulged for a small bit of reminiscing. I first saw Hedwig and the Angry Inch about 15 years ago at the old Jane Street Theater. I then saw it again, and again.
During its original run I had seen it with several different performers in the title role. Hedwig is interpretative and each actor reads, sings and writhes and ad libs between the lines and contributes their uniqueness to the part.
There was then a movie starring Hedwig’s creator, John Cameron Mitchell, which is a classic.
This evening I saw the show not revived, but reimagined, and brought to Broadway.
There was a long line queuing to get into the theater. Mostly young and cool, in their late 20’s and very early 30’s. I am the curious type and asked several people how they chose to see the show and how they learned of it. All were fans of the movie. All were fans of Neil Patrick Harris, the lead in this Hedwig. All knew the soundtrack. All had some sentimental association to the show. They were like me I suppose; my legacy just began a generation earlier.
There is something universal in the message that all its incarnations have embraced. That we, like Hedwig, are desperate for reconciling ourselves with what is missing to make a complete, whole, person.
Neil Patrick Harris is, very possibly, the best performer to have bewigged the role of Hedwig. His singing is wonderful. I expect as Neil Patrick Harris becomes even more comfortable with the role he will continually experiment with it and I look forward to seeing it again. And again. Amongst the many charms of Hedwig is how each perfomer grows into the role and flourishes it.
I have to concede a new found admiration for Neil Patrick Harris. I knew of him from TV which has a filtered and distant relationship to its viewers. Here there is no shutter, no mirror or laugh track. What is, is. And, what isn’t, isn’t. This role is made for him and he owns it. He gives it 100% of himself and it’s thrilling to watch him not just performing, but being. Well done.
The show’s co-star is Lena Hall, playing Yitzak, was also exceptional. Her voice is lovely and gave her stand out song greater meaning then I had seen before.
(Here’s where I have to say what the show is about) Guy lives in East Germany, gets a sex change (which is botched, hence the ‘angry inch’) so that he can leave East Germany as a war bride. Next year the wall comes down and he’s abandoned in a trailer park. When we meet Hedwig he is in stage doing a one night only show, telling his journey in a rock and roll soundtrack.
So then, exhausted with my own rambling and seeking its plot: my review is thus: SEE IT. SEE IT NOW.
Quick note to the producers. Please include more sing-a-long for ‘Wig in a box’. It’s a carefree moment that is rare in Broadway shows that are recklessly instructed by the conservative opinions of focus groups. I would love to see that moment extended