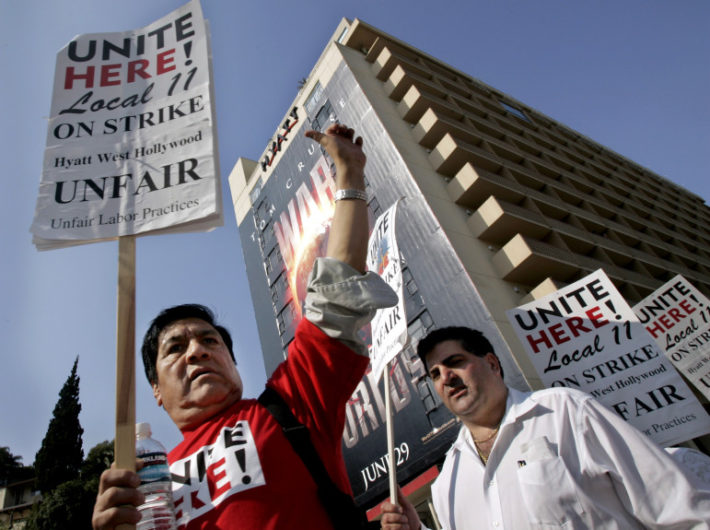 Unionized hospitality workers plan to stage a one-day protest Wednesday at four Southern California hotels over a list of demands that includes boosting their pay to $25 an hour.

A representative from Unite Here Local 11 announced the move Tuesday, just five days after 7,500 cooks, dishwashers, housekeepers, janitors and other employees at 24 Southland hotels voted to authorize a strike. The vote came a week after their union contracts expired.

The workers who will protest Wednesday will do so on their off day or during a break while at work, Cohen said. But as tensions increase during bargaining sessions, the call to strike could come with less than a day’s notice.

A strike would impact operations at 24 hotels. The list can be found at www.unitehere11.org/hotelguide/#guide.

In addition to a pay increase, employees are asking for more affordable healthcare, the implementation of panic buttons, increases to pensions and stronger protections for immigrants.

The decision to authorize a strike comes after months at the bargaining table with varying levels of progress reached with employers.

“We have made a proposal that we see as fair and just — a proposal that would get people to a living wage,” Cohen said. “The hotels are perfectly capable of paying that, so there’s no excuse not to stop people from taking it to the streets.”

Cohen said a full-blown strike would be a last resort.

“We just hope these companies will do the right thing,” he said.

A spokesman with Marriott issued a statement regarding a potential strike:

“Through many years of working with Unite Here, we have always taken the negotiation process seriously and reached agreements,” the company said. “We respect the right of our associates to voice their opinions on issues that are important to them. Should the union and our employees choose to strike, our hotels will continue to operate and work to minimize any disruption.”

Los Angeles and Orange County are two of the last locations where Unite Here hotel contracts have expired. The vote to strike also comes on the heels of settlements reached in San Francisco and Hawaii.