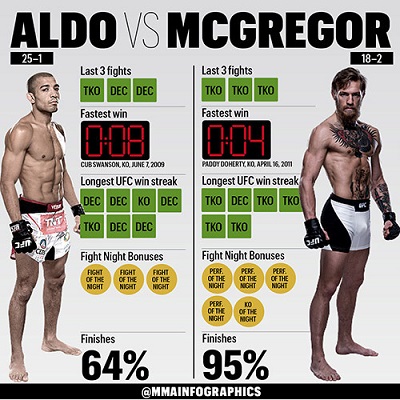 Below is a post I wrote in advance of UFC 194: Aldo vs McGregor and below that is the post script and epilogue. I made my prediction so that I could commit my spoken words to something more permanent. My prediction is here but please make sure to see the post script, the outcome was amazing and will hopefully linger with me a long time…
One of the compromises of being a MMA, and in particular a UFC fan, is there are few people to talk about the sport with. We are always having to explain ourselves and maneuver out of conversation with those who aren’t fans.
This is a message in a bottle and my timestamped prediction on the outcome. I hope it finds you well…
Aldo is great fighter. He cleaned out his division and he had nobody of quality left to fight, only opponents to fill up a fight card.
Aldo is very disciplined and his strategy in each of his matches has been perfect. His kicks don’t telegraph and his shin lands like a baseball bat.
McGregor is huge for his division. He is a coaching on the Ultimate Fighter and he must be walking around over 170 pounds. McGregor’s fighting weight is 145 so that’s a huge cut to make weight and then a huge re-hydration to restore his power and energy.
We know everything about Aldo, nothing about McGregor. And that’s a huge advantage for McGregor. McGregor will train to stop the kick, keep distance and outbox Aldo. He’s going to keep moving to the side and away from the lead foot of Aldo.
What does Aldo possibly know about McGregor? He fights southpaw but can easily change up. He has trained with Rory MacDonald and is excellent at changing levels quickly, without notice. McGregor has amazing knockout power and has tremendous self confidence.
Is Aldo going to try and frustrate Conor McGregor, get him upset and give up on his strategy? Is McGregor disciplined, will he stick to the script and adapt to the puzzles of Aldo?
Aldo vs McGregor – my prediction.

Styles make fights and Conor McGregor is every box checked. He has the skills, fighting experience, bodytype, height, weight, reflexes and (almost psychotic) confidence needed to conquer Aldo.
And one more checked box, Conor McGregor has gotten into Jose Aldo’s head…
(This epilogue and postscript)
McGregor won the fight in 13 seconds. Something more than the visual of the knockout lingers with me. McGregor had several interviews post fight and he explained a small bit of his philosophy as a person who is a fighter. It is rare that a philosophy can be abbreviated without losing its potency. These are his quotes, without any further background noise from me.
Precision beats power, and timing beats speed
To the ways overcome adversity.naked eye it was 13 seconds, but to my team and my family it has been a lifetime of work to get to that 13 seconds.
The true greats will al