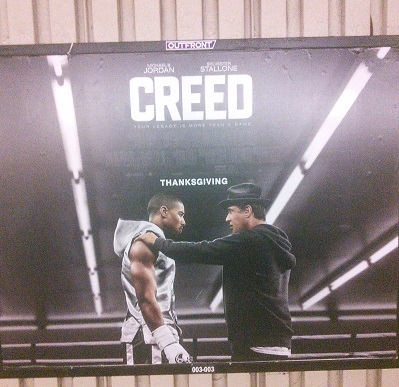 I just saw the poster for Creed and boy, what a great movie it has to be!
Two thumbs way up.
Sylvester Stallone looks grizzled but also wise and compasionate. It’s the performance of his career and he better not be overlooked for an Oscar again like he was with Over the Top, one of the most underrated posters of the ’80s.
Sylvester Stallone is playing an older Rocky Balboa and it looks like he is passing his baton to Creed, the son of his old nemesis.
In the poster Rocky has his arm on the shoulder of Creed. He loves him like a son and he’s trying to impart some wisdom on the young fighter, but Creed is reluctant, standoff’ish. Can he trust this strange old man trapped in the body of a 30 year old?
I’m guessing that when we first meet Creed he’s tough and hard as nails. He’s jaded and he’s been hurt and fighting is all he has ever known. He doesn’t want to learn anything about Rocky. But at some point in the movie there is a really touching scene where Rocky is telling the younger Creed all about his father:
“He was a strong man and he was determined, he was a fighter just like you!”
I was weeping at the poster.
No BS movie review. Creed
I have been to busy lately to be burdened with an entire 2 hour movie, but the poster was playing at my local subway station so I figured I would check it out while I was waiting for my train.
The acting is great, the script and the direction. It was fast paced.
I’ll be back at the train tomorrow and I can’t wait to see the poster for Creed again, I loved it that much. And so will you.