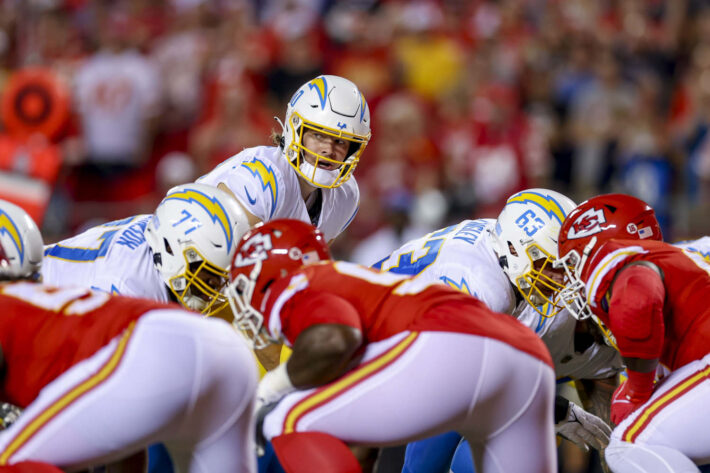 Not to mention its the 50th anniversary of the stadium. Along with this division being called the toughest in the STACKED AFC, this game had a playoff magnitude energy about it. The implications that would come along with the final outcome of this game will be felt until the end of the season.

The first half was a lot of “textbook” moving the ball downfield and executing. No long-gassers. Small yards and a nice tempo lead to bleeding the clock and putting points on the board. Going into the half with a small lead would be it; but a lead none the less in a road game situation.

Some bright things we saw in the first half worth mentioning.

With the absence of Kenan Allen, Mike Williams stepped up and into the WR1 position for the game. Another ray of light is rookie Fullback, Zander Horvath, in his first two NFL games–getting just as many touchdowns in that span. Jk Scott also had another great week. While having to punt the ball six times Thursday Scott was able to almost surpass 250 yards.

Now I’m one of those realists that never put the blame of a game on one singular play. its 60-minutes of play time, not just one play. But what would the difference of two interceptions and a bad call for illegal contact? Substantially more if you ask me. Even Patrick Mahomes commented minutes after the end of the game on the set of the Thursday Night Football that, “That’s a great defense. Im glad some of those picks got dropped and some flags were thrown.” The Chargers were clearly the better team.

During the second half of the game, Corey Linsley and Tre Pipkins–both offensive lineman–went out because of injuries. Putting those tasks to backup’s, Clapp and Storm Norton. Storm Norton and Zion Johnson had the right side locked in so well the defense had to switch around and try to go for the center left-guard gap.

Quick tempo leads to a goal line pick six interception. defense continues to play tough. Prime example is the most insane tackle i have ever seen in my life. Derwin James lifted Travis Kelce, a 6’5” 250 lb grown man, running full speed at Derwin. He pops him up off the ground and flip, and slams him down with authority and aggression that was out of this world. A three-tap spinebuster.

Justin Herbert after getting hit hard and going down, takes the hits and keeps on going. Even with a clear chest or rib injury, he doesn’t waive in the backup. He sucks it up knows his team is counting on him and courageously goes back in. It was very reminiscent of Phillip Rivers playing injured in the AFC championship game. Heart and Pride even though well fought; with the breaks the Chiefs got it wasn’t enough in the end. Chargers fall to the Chiefs 24-27. Two games down, 15 to go.

With a long break in between games, the Chargers look ahead at facing the Jacksonville Jaguars at home in Sofi Stadium. So far Herberts x-rays have come back negative. Now just waiting on CT scans to double check for microfractures. This break gives time for Allen, Linsley and Pipkins to heal and come back strong for their home crowd.