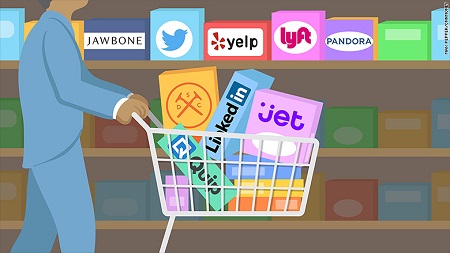 The past 40 years have been good. Progressively lower inflation, friendly stock markets with insatiable appetites, productivity gains, technology and a few trillion dollars between friends has done wonders. All the biggest companies were torn apart to improve shareholder returns. Entire industries were forced apart and fragmented. But, markets oscillate and now it is collapsing inward.
Industry is being defragmented.
Rather than weigh down with flourish, just these bullets. Leaving it to you to fill the white space:
New entrants into mature markets improved upon stations on an assembly line, did it better and cheaper. Several were acquired for any, and sometime all of the following reasons…to get basis points improvements within the processes of the acquirer, to be accretive to earnings, to offer ancillary products and occasionally just for the logo and the good public relations
Now we will see the mega merger as those rolled up companies have gotten to size, taken out the supply and excess capacity. I wrote about it late last year: 2015 Professional Services M&A and the new buyers
Taking out all the supply and distribution will be the retail mechanism to push inflation to the consumer
There will be a massive run on the Fed bank as another round of stimulus cascades and the biggest of the big companies make withdrawls. This will also be transformative and will redefine identity and other ‘frog in boiling water’ ways. I wrote about it here:  What is Country?
Good for those who have shares. Bad for those who have not.
Now is a great time to start a new company. make it profitable. Good luck.