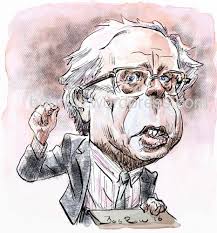 Disclaimer I voted for Bernie Sanders in the NY primary.
Ostracism was a procedure under the Athenian democracy in which any citizen could be expelled from the city-state of Athens for ten years. It was used as a way of neutralizing someone thought to be a threat to the state or potential tyrant.
The Clinton political apparatus has closed the curtain on Sanders.
Sanders has listed his demands but he doesn’t control the drawstring for the curtain. He is the hostage and also the hostage taker.
TPP is the darling of Mass Media, their interests are baked deeply into it. They want it passed  and only its advocates are allowed on their soapbox.
The substance of Sanders ideology is that TPP is evil and anti democratic.
Sanders misses his fans. He’ll find some very personal logic that reconciles all the contradictions and he will endorse Hillary. Maybe he will say that the threat of a Trump presidency is so great that the battle for TPP can be fought some other day.
Winston Smith greatest fear was rats, it was the lever. The Clinton apparatus has found Sanders greatest fear, it is neglect. They will exploit it.Disclaimers, trigger alerts and microaggression:
I was born and raised in NYC. I am 50 years old. My bio is here.
I am a (liberal?) Democrat. I have given, hosted, bundled, been on finance committees. I’ve split the vote. I can read polls. I can make up compelling statistics
I was infrequently in school, I cut a lot of classes. I was inadequately indoctrinated and only partially assimilated.
Hobbies: I study Supreme Court decisions, Roman, Greek & American History. I play scrabble.
I have an unpleasant but occasionally profitable habit of asking ‘why’ until I understand all the complexity of something.
I intend to vote for  Trump, I wrote about it here