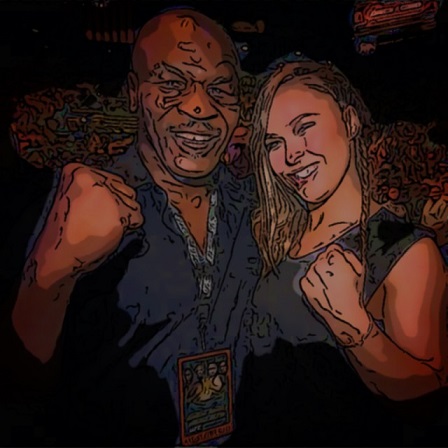 Ronda Rousey is a great athlete and fighter.
We might be in the beginning of her reign in mixed martial arts and maybe as a cross over star in movies, television and whatever else her appeal and brand might lend itself to.
Right now she is still a curiosity. She has had some exposure and is on the periphery of the mainstream. Many people know what she is but they don’t know who she is.
Internet and social media have compressed her stars ascent. Her rise has been meteoric but that also means her fall could be as quick.
Fighters careers rarely last very long. The body can only endure so much punishment until one day it can’t. Rousey’s fights have been short and she hasn’t sustained many hard punches, but a fighter’s granite chin will turn to glass. They always do. The wisest fighters leave the sport when they feel that change happening. There are very few wise fighters. Getting punched in the face is not a wise person’s sport.
Mike Tyson was a superstar. He brought in a new generation of fight fans. He cleaned out the old timers and the near greats. He was great (if not the greatest) in the ring but outside the ring he was a mess. Eventually the Mike Tyson in the ring and the one that was hidden from public view could no longer be kept apart. Fighters are usually not nice people. They like to hit people.
He became the person people rooted against. To meet public demand to dispatch Mike Tyson, Evander Holyfield was manufactured. A great cruiser weight champion became chemically enhanced and beat Mike Tyson at his best.
Ronda Rousey is still largely unaccomplished as a professional fighter but she is very intriguing as a model for women. She is bringing new fans to the sport. By making her own brand bigger she is proportionately increasing the value of her medium, Mixed Martial Arts and the UFC.
And yet, so early she might be at the start of casting herself the villain.
Most glaring and recent is her choice of boyfriend, Travis Browne. A fighter accused of beating his wife is not media friendly. It collides with how she would like to be perceived. It challenges people to reconcile ‘what’ she is with ‘who’ she is.
It might be the start of something unexpected.  She may become the first female villain in MMA. And, that means that a hero might need to be created to defeat her.
It won’t happen in Ronda Rousey’s next fight, UFC 193 against Holly Holm. That fight will be easy pickings for Rousey. But the fights after that will be harder. A fighter is only great when they have risen to a challenge and defeated it. Rousey has not yet had a real challenger.
Her biggest challenger might be herself.
“Recent posts in MMA” “6” style=”load-more” items_per_page=”6″ button_color=”mulled_wine” item=”basicGrid_TextFirst” grid_id=”1444958721056-c3d31624-9158-5″ taxonomies=”363″]