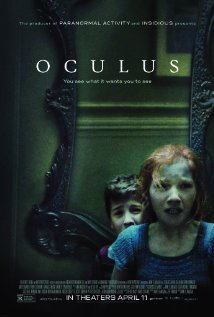 This is two reviews in one post. Oculus the horror movie and Oculus Rift, the Virtual Reality headset display.
Oculus (horror movie)
This movie was terrifying. It was so scary that I had to take a breather from watching it. I paused it and played a game of scrabble (bit of trivia: I won the game on the last play by bingoing with ‘retinas’ to go out)
Oculus has a great script, great acting. It’s not burdened with an abundance of special effects.
It’s a simple story. A brother and sister are battling a mirror that killed their parents. The movie lingered with me afterwards. It made me think about stuff. I have a sister, I have parents. we had a mirror. Freaky.”7534″ alignment=”center” onclick=”When I was a kid I had one of these…”]When I was a kid I had the Wiewmaster. I got it as a birthday gift and I had to act all happy when I opened the wrapping up. It came with slides of places and action stars. I added some saccharine exclamations so that my family could be all happy with themselves.
40+ years later…
friend who had assisted in financing the development of the Oculus Rift invites me to his office to try on a pair of googles, the Oculus Rift. I played a simple game, watched a movie.
Virtual Reality was always a promise. It never happened. Until Oculus Rift.
The day Facebook announced that they had purchased the company I bought the stock. Facebook spent money wisely. They will be the owner of infinite apartment units.
Oculus Rift will finally be available on the market in the st quarter of 2016. The future has begun. Get the Oculus Rift. Its amazing.