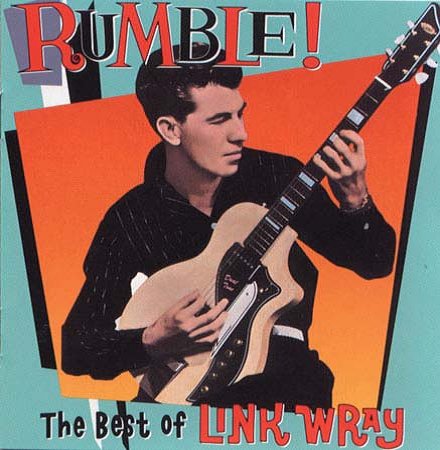 The Father of the Power Chord

It always seems that people only blow smoke about great rock ‘n’ roll heroes after they slip off into the Fifth Dimension. Sorry to say that Link Wray, who died Nov. 5 in Copenhagen, unfortunately joins this list.

Wray’s death resembled his career. Nobody discovered it until much later. The fact Wray made it to 76 years old is remarkable. The North Carolina-bred guitarist caught a bad case of tuberculosis serving in the Army and had a lung removed. After he was discharged, he led the Appalachian flank of the early-rock juggernaut. By mangling his Danelectro guitar and cheap amplifiers, he created a swampy and distorted sound that played havoc with teenage hormones at sock hops throughout the Carolinas. His disabled lung capacity prevented him from singing, but he made his guitar scream, jiggle and shout (with the help of a turbocharged Tarzan rhythm section) in ways not imagined and rarely duplicated.

Wray’s first modest hit, “Rumble,” was little more than a simple warped blues jam, but it was essentially the Rosetta Stone for dozens of hard-rock sub-genres, including surf, Zeppelin- era blues-metal, and punchy Batman-style motion picture scores. From the 1950s to the 1970s, Wray and his band, the Wraymen, recorded several records and toured the honkytonks, but were never more than a peripheral force in pop, possibly hobbled by Wray’s stubborn refusal to incorporate a voice element. What is not in dispute, as you can read in all the obituaries, is that nearly every influential rock pioneer — from Townsend to Springsteen to Young to The Ramones — heard their future in Wray’s simple but infectious power-chord noodling.

Wray enjoyed overdue tribute with the success of the Pulp Fiction soundtrack (leading to a mid-’90s bonanza of soundtrack royalties after other film producers fell in love with his dangerous signature riffs) and the modest revival of long-forgotten surf-twang throwbacks. By this time Wray had decamped to Denmark and led a fairly reclusive life as a father and as a husband to a much younger wife. He kept a Danish drummer and bassist on standby, however, and hit the honkytonk, record-collector and European festival circuit when, one would assume, the money ran out.

I saw Wray only once, back in May at the Henry Fonda Theatre in Los Angeles, and he appeared to be a frail wisp of a man with little fight in him. His hunched frame moved slowly and carefully, clad in a mildewed relic of a leather jacket and a pair of sunglasses. Add in a greasy, badly dyed ponytail, and you had the Full Link, unwilling to bend to modern tastes and fashion even now. The show was a low-rent Vegas knock-off, with Wray’s wife, a towering cross between Viking amazon and goth diva, remaining on stage with him to serve refreshments and relieve him of his leather jacket.