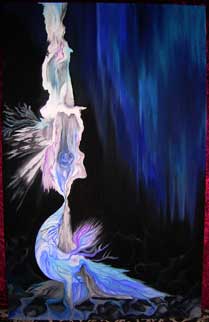 In seven days, a universe could be created,
And seven more to make it a station of hatred.
It’s stated, there’s so much generated hate today,
I wonder how long it’d take for mankind to kindly change its ways.
In seven days, God’s heaven could rain a deep shower,
To devour all those who have turned evil and sour.
But those who tower above these cowards,
Can be saved with power, this very hour.
In seven days, a homie could betray another,
And watch his close friend as he dies by others.
But he will be smothered by other so-called “brothas,”
Cuz da cycle of betrayal doesn’t stop in this world of sinnas.
In seven days, eleven waves can sweep da nation,
Five from mass murder, two from rapin’,
Three eruptions from da tree of corruption,
One from hatin’ Satan, da prince of devastation.
In seven days, an illegitimate child will be born,
Who will be torn without a father’s shoulder to lean on.
Dad’s gone but Mom says it won’t be long,
Seventeen years dawn but he still waits for Dad by da front lawn.
In seven days, it’ll be okay for a government to oppress lives,
They just have to lie and hide it from da world’s mind.
Guys bein’ thrown in jail and they don’t know why,
Offi cials dine on da tears of a sorrowed society’s eyes.
In seven days, a stage of happiness is set,
A boy with his newfound toy he always wanted to get.
A man who is a fi ance cuz he got her to say yes,
A grandfather stayin’ wit a grandson he had never met.
In seven days, a hooray can be heard as excitement storms,
A calm silence can be heard as a life moves on.
In seven days, sight might be restored,
But for some, in seven days, a weak is formed.