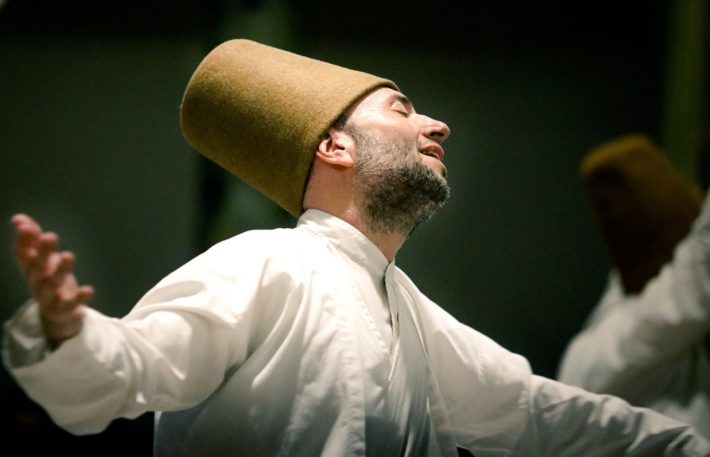 Sufism/Mysticism in Islam did not originate till the 2nd Century AH. Ibn Khaldun says the first man In Islam for whom this title i.e. Sufi/Mystic was used, was Jabir ibn Hayyan, but different people of knowledge argue whether this title arose from the Companions of Suffa or from the word Philosophy, this, however, remains an issue of dispute. It is unanimously agreed that one of the earliest Sufis, whose names are most prominent, were Junaid of Baghdad and Ba-Yazid Bustami.

Who actually is a sufi? Sheikh e Akbar of the Mystics, Ibn e Arabi defines a sufi as:

There are over a thousand descriptions of a sufi but to describe briefly I would say, a person who holds the views of Pantheism, Simaa, continuation of Divine Inspiration and revelation, Sahv and Sukr (intoxication and sobriety), and so and so, is a sufi.

Islam did not receive mysticism as well as other religions did, because the views of Sufis apparently contradicted the views of Quran. Sufis believed that there is a part of religion that is for the laymen and one for the special and chosen people. They discussed their ideas of unity of existence, of pantheism, of inspiration/Kashf and of the hidden knowledge, among their fellow “chosen ones”. Laymen Muslims considered those ideas to be utter disbelief. In the very beginning when Hussain bin Mansur Hallaj propagated these ideas in public, he was hanged by the consensus of the Scholars of the time. This public hanging was the trigger that pushed these ideas amongst the public. Different Scholars started showing interest and this became the reason for spreading of the teachings of Sufis. Scholars like Abu Ismail Harawi sahib-e-Kashf-ul-Asrar and Al-Ghazali and Ibn Arabi and Sakhawi and Al-Subki described the ideologies of Sufis in great detail without equivocation. Al-Fusoos and Futuhaat (Books of Ibn e Arabi) became the target of other scholars who regarded this mysiticism, deviance from the path of Islam. Thus, Ibn Qayyim critiqued this thinking in his book Madarij-ul-Salikeen and no doubt critiqued well.

It is, infact, the truth that the teachings of Sufis are very unrelated to Quran and Sunnah that is why most of the scholars rejected it, but still for some people Spirituality was important they held on to it because they could only attain it through mysticism, Al- Ghazali says: “I found spiritual peace with the mystics”.

Now-a-days many turuq (Silsila) are present which claim to have their basis in the pious predecessors. All of such claims are weak, the famous traditions are of Qadri, Suhrwardi and Chishti all these claim that Spiritual knowledge( one not to be told to laymen) transferred from Ali to Hasan of Basra and so on till now, but there is a problem with that as it is not established that Hasan Basri ever met Ali ibn Abi Talib.

This chain also has a problem of discontinuation because Ba-Yazid never met Jafar the truthful, he was born about 40 years after Jafar, secondly, Abul Hasan Kharqani was born after the death of Ba-Yazid.

Thus nothing about Sufism can be said with certainty, it is very vague just like its ideologies.