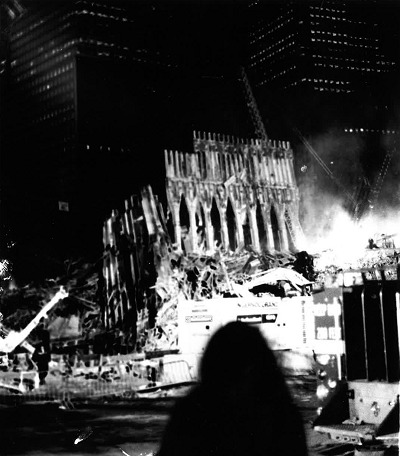 This is a photo of the silhouette of Nancy Konipol taken in the days after 9/11. She was one of only a few photographers invited Ground Zero by the Governor and document those moments.
It is also a silhouette of so much more.
I am against bans of any sort that target Muslims. I think this type of panic is a gateway hate. It leads the public to permit horrible things as preememptive strikes against a contrived enemy. We spend a lot of money, hundreds of billions a year to protect us from all the things that go bump in the night. And we throw each other in jail, as a percentage of the population at a greater rate than any other ‘modern’ and westernized’ country. And yet our crime rates, with that same schema, is also the highest. We, the Americans, kill Americans exponentially more than other enemy.
We terrorize ourselves.
Most Americans do not have real sense of our history. Whatever existed before is only a soundbite, usually uttered by an uniformed source an echoed by the more uninformed. Our memories are short, little existed before yesterday. Everything is today. We have an overload of information and yet we aren’t any wiser, only smarter.
Before World War 2, America was a racially and religiously divided country. During the war 13 million American soldiers met each other blacks, Jews, Catholics. They loved each other and they took that sentiment home with them.
I am closing this ‘session on a psychiatrist’s couch’ with a picture that was also taken during Nancy’s documenting of Ground Zero and 9/11. These were the heroes of that time. The heroes were not the politicians who (very) briefly made appearances at Ground Zero as a marketing ploy. And the heroes also were not the countless tourists and their selfies at Ground Zero. And the heroes also weren’t those who voted for George W. Bush.
The heroes of these times will be the ones who stay calm, allow reason to settle in and remember our history.
“8052” img_size=”full” alignment=”center” “Recent posts in Misc”]