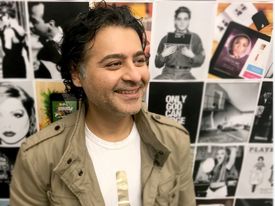 Quite often, the best ideas to move an industry forward come from outsiders looking in. Jeff Bezos wasn’t a librarian, publisher, or author when he founded Amazon. He was a computer engineer who recognized an opportunity to do things a bit differently in an industry that’d been stagnant since basically the dawn of the printing press.

Big thinkers think big thoughts. And for Naushad Huda, those big thoughts have turned from corporate brand strategy to the world of wine. His expertise is connecting people to places, things, or ideas, and, as tends to be the case with so many powerful minds, it doesn’t just stop when he leaves the office.

So, it’s only natural for Naushad’s knack for creating commercial connections to seep into his passion for fine wine, immediately recognizing a generational gap between modern consumers and centuries-old craftsmanship.

“‘I like this grape’ is a passion project of mine,” he said, referring to his online platform aimed at modernizing various aspects of the wine world to fit today’s consumers.

“On one side you have a multi-billion dollar industry called wine, and over here you have modern audiences, which is a constantly evolving segment.

“The industry, in my opinion, hasn’t really evolved, and so there’s a misalignment between industry and consumer. How do we align the two?”

Naushad points to the ways today’s consumers interact with brands, purchase things and make economic decisions as opportunities for the wine industry to catch up.

And for Naushad, the industry doesn’t just include producers, but encompasses education and publication, as well. His platform aims to evolve the way wine blogs are presented, wine events are held, and how wine authors speak to their audience.

“When consumers go to a wine region like Napa Valley because they heard they should go there, it’s very intimidating,” he said.

“There’s over 500-plus wineries, there’s a plethora of wines to drink, and people can feel like they don’t have the confidence to go explore a region because they don’t know much about it.”

The conclusion he came to in order to address this shortfall in education was to produce a series of books featuring some of the most influential voices in wine with one caveat: they weren’t allowed to discuss their own juice.

Instead, the books are centered around spreading the most experiential knowledge possible, allowing the reader to choose their own adventure when they do travel to a specific region.

And they don’t disappoint. His Drive Through series, written by Paul Hodgins, is a must-read for anyone looking to foray into the best-known wine regions in the United States.

While industries are often late to respond to consumer trends, the world of wine is a bit more unique than, say, consumer goods or tech.

People are very quick to adopt and demand more when it comes to their choice of snack foods or the cell phone in their pocket, though those choices weren’t even really an option as little as thirty years ago.

With wine, however, there’s a benefit many brands recognize in being just out of reach for the majority of consumers. It’s ancient. It’s luxurious. It’s art. And, it’s not for everybody.

But, Naushad says, there’s a reason you still see commercials for other luxury items nearly every place you look, and the wine world as a whole can profit from listening to shifts being driven by newer consumers.

“In food & beverage, one absolute directional trend is this idea of transparency,” he said.”

“Consumers want to know what is in the thing that they are eating or drinking. Even in beer, where now on the back of a label it’ll give you nutritional facts and ingredients.

“That wasn’t even around a year ago.”

Transparency, he says, is a force that wineries are going to have to reckon with sooner rather than later. And it’s also something fast movers can get ahead of to help expand a new, loyal base of consumer.

But, as with everything, it’s a delicate balance. Go too far in one direction, and you may scare people away.

One thing many wineries around the world are experimenting with is a screw cap on their bottles. For some varietals, it’s been well received by consumers. Winemakers like it because it’s been shown to be a more precise and predictable way to package their product, especially as the wine ages.

However, Naushad says, there’s a romanticism about opening a bottle of wine with a cork in it that consumers won’t be so quick to run from.

“There’s that innate beautifulness that can go away when we just [unscrew a bottle],” he says.

“It’s the same reason it’s so hard to remove the record from music. It’s so much easier to go to Spotify and play whatever the hell you want, but you still have a segment of the audience that still wants their records.”

The one constant we at Monarch hear from winemakers, wine lovers and wine educators is how it’s not just the product they fell in love with, but the stories behind it.

Connecting ancient stories to today’s consumers can certainly be difficult from behind a screen or high up on a billboard, so Naushad is bringing the story to life on his platform, in his book series and through his personalized recommendations.

“I don’t think people know how deep the stories of some wineries go,” he said.

“These people are deep, they’re really into it, and they get truly geeky about the land. And that’s something we forget is that wine, at the end of the day, it’s agriculture. It’s farming.

“For people to have that much passion about farming one thing- grapes- is phenomenal to me.”

The beauty about wine, and in many ways the basis for this publication, is the knowledge that there’s never going to be a day when every wine has been tasted. There are so many stories to share, so many places to see and so many people to meet that it’s, pardon the pun, intoxicating.

And when making true connections between consumers today, it’s important to remember the first rule of business: people buy from people.

Sharing immigrant stories that built the foundation of America’s great wine regions, the family lineage that’s passed down ancient processes from generation to generation and walking the land that’s yielded the precious fruit they hold so dear is always going to resonate.

It’s why addressing the gap between what’s worked so well in the past and what will continue to work in the future is worth so much big thought.

“We all buy story,” Naushad said. “You can’t forget the story.”