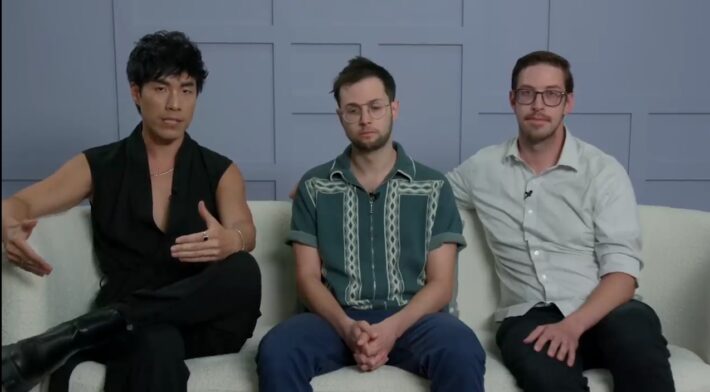 On October 3, the well known YouTube quartet, the Try Guys, released a video titled, “what happened.” to their channel with only three of the four members facing the camera ready to speak about the scandal that has rocked the streaming world.

The topic at hand was something that was not familiar ground to the 8 million YouTube followers who have looked to them for the whole-hearted entertainment and humor that the crew has given for the past eight years after leaving Buzzfeed. Zack Kornfeld, Eugene Lee Yang and Keith Habersberger sat in solidarity on a couch.

While each of the remaining Try Guys seemed to have different bodily reactions to each one’s dialogue, it was clear that they all were torn by the affermations of the affair and the decisions that had to be put into place.

According to said video, Fulmer who was a founder, former manager and fourth Try Guys of the famous YouTube Channel, admitted to having a long affair with now former Try Guys video producer and cast member of the Food Babies—a sub-section of the Try Guys—Alexandria Herring.

On Sept. 27, the allegations of the cheating was proven when a video of Fulmer and Herring were caught kissing at a New York City social bar, which allegedly occured in May of 2022.

“On Labor Day Weekend, mulitipule fans alerted us that they has seen Ned out with an employee engaging in romantic public behavior. Ned confirmed the reports and since confirmed that this had been going on for sometime, which was obviously very shocking to us. And we just want you to know that we had no idea that this was going on.” Said Habersberger.

This comes as a total shock to the fans of the channel as Ned Fulmer has always posted and pointed himself to be the devote husband to Ariel Fulmer and father of their two sons. Ned’s wife, Ariel, has been a consant presence on the channel since 2014 and has created channels on YouTube alongside with the partners and friends of Habersberger and Kornfeld. She is also an accomplished stylist, podcast host, and social media influencer as well as a cookbook author,”The Date Night Cookbook,” which she wrote with Ned.

“From the jump, we were acutely aware of just how contrary this was to the values of the company we’ve built and those of everyone who works here,” said Lee Yang, “this is something that we refused to sweep things under the rug. That is not who we are, and that is not what we stand for.”

It is not hard to noticed the body language of the three remaining Try Guys as they sat vulnerable. The toil that each one of them into the company has now had to be restarted by a blindsiding of one of their friends, not to mention, the long friendship that they had with Fulmer.

Holding back tears, Kornfeld said, “We’re losing a friend, we’re losing somebody that we built a company with, we have countless, countless memories with …”

Fulmer has released a statement on his Twitter account stating that his family should have been his prioity and that he apologizes to the crew of the Try Guys and especially to his wife Ariel. Ariel has also released a statment thanking everyone who has been supportive in this horrible time of their relationship and wishes that everyone to please respect the space of her family.