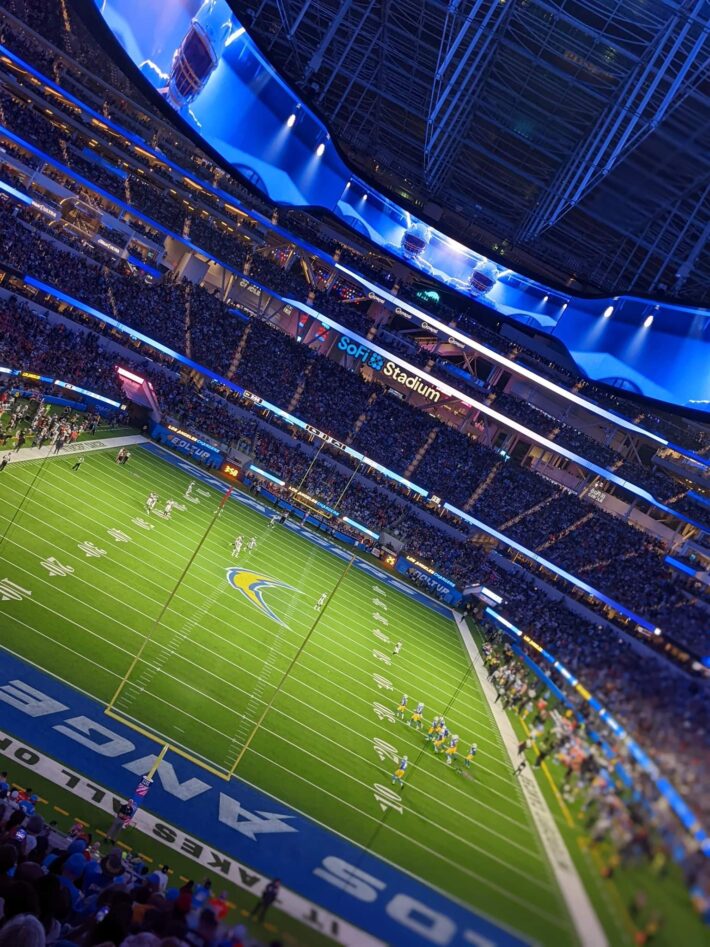 Monday night and the Chargers faced their third-divisional game so far this season. That means out of the six games played this season, half of them have been inter-divisional matchups. That makes for a tough start to the season but coming into the game the Chargers sit at a respectable 3-2. Were we expecting, their fans, a little bit better of a start to the season? Maybe. But think about what the Chargers have had to deal with so far this season. Wide receiver one–Keenan Allen–has only played one game so far this season, out with a lingering hamstring injury. Our starting left tackle is out for most likely the whole season. One of the team’s top-ten pass rushers is out for four weeks. Our center is having knee issues which is also causing him to be inactive during this Monday night matchup. Finally, our top-five quarterback has a bruised rib cartilage.

Despite all of the let downs for the Los Angeles Chargers the season, the NFL managed to save the nighy with a halftime show that was amazing. Other than the Halftime App Cue Live not working properly, the halftime show was breathtaking. A parade of Breast Cancer Survivors, and doctors researching in the medical field, took to the green while a winner of “The Voice” sang with a choir backing her vocals. A great spotlight on surviving and thriving.

Early on in the game the Broncos were able to get in three and then finally get lucky on a blown right-side coverage and a touchdown before the end of the first-half. The Chargers not matching them until a few minutes before the half. Chargers players, Salyer and Ekeler managed a huge rushing touchdown while kepting their feet pushing and kept the pile moving right into the end zone.

The second half of this battle was definitely a hard-fought defensive game. every drive was more or less get the ball and go two or three first downs and then punt it to the opposition. Justin Herbert is the first player in NFL history to throw for over fifty attempts and not throw for a touchdown. Neither quarterback was throwing deep, and the defenses were getting fed. Another multiple sack game for the Chargers defense one of which really sticking out was D Tranquil’s absolute hammer on Wilson.

The most anxiety ridden moment of this game. one of the Chargers linemen goes down on a play and he’s slow to get up. What’s awful about watching a game live is you can never hear the refs, and when there is an injury there isn’t a up to the second commentating like there is when you’re watching live tv. so, unless you have super vision or can by chance see the players number you don’t know who’s hurt. Already on our second-string center Clapp, we weren’t set up to have to go for the third option. with a second-year depth player, the Chargers were faced with a defining moment. especially against one of the best defenses in the league. Put up or shut up time.

Going to overtime the home crowd was amazing. All game being silent while the Chargers offense was on the field and getting rowdy when their defense needed a boost. Special teams won this game for the Chargers. a punt return that was knocked loose and fumble recovered within the 30-yard line. All the Chargers need to do is kick a field goal and they have stolen this game. The stadium is rye with anticipation. The kick is up. The Chargers win in overtime, defeating the broncos 19-16! The stadium erupts in cheering and jumping fans going absolutely crazy. What more could you ask for?

A Divisional game on Monday night primetime and it goes into overtime. These are the moments generational seasons are made of. They will be going into week seven with a 2-4 record and Face the Seahawks at home the week before their “bye week.” Can the Chargers go into the “bye week” 5-2 and sit pretty in the division? We will find out Sunday