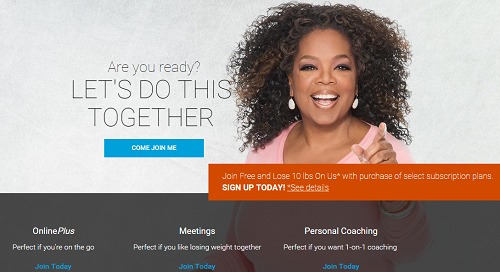 I used to like Oprah Winfrey.
I never really watched her show but my mom did. My mom read all of the suggestions from the Oprah Book Club and for my mom, homebound in her last years, Oprah was a friend. That was good enough for me, any friend of my mom is a friend of mine.
That was 20 years ago, my mother is gone now.
Time has not stood still for Oprah, she has reinvented herself to be the frenemy of the fat.
She bought 10% of Weight Watchers, took a seat on their board of directors and is active in their marketing and as a spokesperson. What she gives to Weight Watchers she takes away from her fans.
She looks very glamorous on the website doesn’t she? Dermatology and plastic surgery treatments like ultherapy and coolsculpting, fillers like restylane and juvaderm, makeup artists and photoshopping can do that. Eating weight watchers can’t.
She is a lie and a false testimonial.
Weight Watchers is in the business of selling prepared, unhealthy, heavily processed foods and a subscription service.
Weight Watchers is not in the business of getting people healthy, instead they are in the business of converting unhealthy people who buy elsewhere to unhealthy people who buy from Weight Watchers.
Oprah’s consumer isn’t the young kid, to them she is a vague figment of the past, her appeal is to the age group that remembers what she was.
Now she has proudly placed her fans onto her assembly line and moves them along, first stripping them of quaility nutritional and lifestyle information and stuffing into that void the salts, sugars, twists and lies of Weight Watchers, then taking away their health and their money.
The Oprah brand is very expensive. It will cost you an arm and a leg and it might kill you.