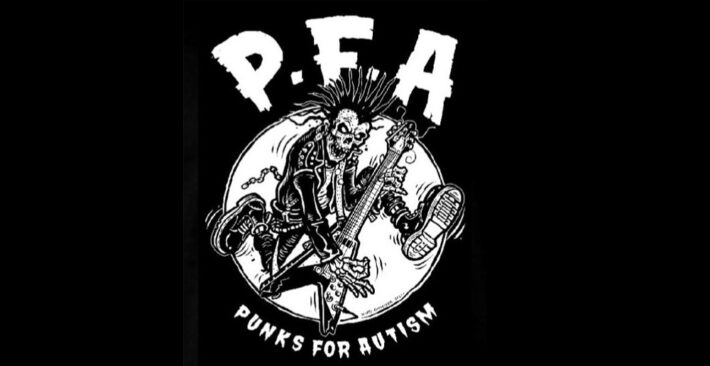 Music has undeniably been bestowed a beautiful platform to reach out to individuals in so many ways. Like a breathing lung, music is a necessity to living a full life. It speaks with a language that is as fluid and concrete as mathematics, and undeniably so, it is mathematics.

Music in itself is a charitable mention to mental and physical health. Vibrations can and have definitely gone further than the man-made string instruments and strong-bass percussions that wail within the punk scene. Music is made on the daily when the vibrations are met and caused from being to being. Some might call it love, and some might call it holding out a hand. ‘Punks for Autism’ is both, and has landed their prolific boots in a pit of care.

I sat down with the founder of ‘Punks for Autism’, Steve Lombardo, to speak about the who, what, when, where, why and how’s of this wonderful charity:

Q: Where are you from originally?

Q: (Before Punks for Autism) And what were you doing beforehand?

Q: And so, before we start talking about the main concept about ‘Punks for Autism’. How long have you been in the punk scene?

A: i’ve been going to punk hardcore metal underground show since. For about 30 years. I’m now so maybe, since I was about 12-13-years-old i’d say.

Q: What made you start Punks for Autism?

A: So I have two children on that–are on the autism spectrum.One is my son Vinnie. He’s 9-years-old, and my daughter, Evie, who’s 7-years-old; they’re kind of on different ends of the spectrum, I would say. One is a little bit more severe and one. What I guess you call higher, high functioning and basically well kind of maybe (why it) started is that.Our Organization has been around now for about a year and a half as an official 501 C three nonprofit. Just kind of during the pandemic. ust looking to change things up and do some good. I’ve …

Then the continuation of the conversation was based on the support of his son and the punk scene in relation to autism. Mr. Lombardo wanted to find a more interesting way that would bring awareness and love to a condition that is well known through families.

“You know, there are, you know, (an) autism community and whatnot. I noticed most of stuff out there was just kind of, I don’t know like, go knock on it, but just never really appealing like shirts and you know kind of just merchandise or stuff like that (are) some pretty bland and like generic and … I don’t know stuff that, wasn’t really up my alley that (I) really want(ed) to wear so my wife and I, you know being huge fans of underground music … .skating, surfing, all that just want to put stuff out there, that would be more aligned to something that like people would want to wear you know, at least for our generation, and you know people into. Into the same kind of stuff that we are, which I know is you know a lot of people out there, so I saw, I saw an opportunity for that and … I have several friends that are tattoo artists and you know in bands and stuff and just kind of started in a network, initially with a couple of them this started with one design. See how it goes and then, or how it went and got a positive response and then you know I started do a couple more and just kind of blew up from there.You know, seeing the kind of response we’re getting from people.”

Q: “Your Organization has a great impact. And what impact do you think that it is and what do you want it to be?”

A: “I think it’s yeah I think so far it’s been, I mean the overwhelming impact that we feel that … at least from what we’ve seen and heard it’s been relatively super positive … the way we kind of image a grown up punk rock and hardcore and everything I mean, I noticed that a lot of people at shows. You know? Maybe they feel that they don’t fit in in some way or you know they’re searching for their identity and, I know, like there’s similarities between that and autism Center in a lot of autistic individuals … they made me feel that they don’t fit in with typical society, you know? They may feel like, “I’m a black sheep,” but you know they don’t fit in with mainstream society, so I saw a lot of parallels to that. Even myself, I mean i’ve been fully tattooed and just used to being judged, for a long time just even on … I know it’s now more acceptable mainstream but … saw that and just said, “These works can demand, there’s so many similarities.” Just between punk rock or between underground metal or underground hip hop, and and just being on the autism spectrum … and other individuals with special needs to how they may feel that they don’t fit in well, so I think the impact that we’ve, you know, been able to achieve and establish continue to hear … it’s been great people feel that this, they can identify you know.So many people reach out and Oh, I have you know other I have a son or I have you know, a neighbor so forth autism.”

“I guess, to answer your biggest question, it’s been a really great impact and where to take this as. We want to keep expanding on it we’ve been doing this for a year and a half now and our goal is to really keep putting out working with different talented artists from all over the world and all different backgrounds, putting and emerging (is what) we’ve been able to do; put on a couple of local shows in San Diego with some bands to sponsor … we’re looking to potentially branch, and maybe make some music compilations … the sky’s the limit. I know I think we’re just getting started, but you know we’re, we’re seeing the response we’re getting and you know we’re open to any kind of new ideas. It’s been cool to see.”

‘Punks for Autism’ is a pioneer that has brought awareness to a realm that might not have been seen before. Some see punk as a violent and chaotic scene, especially in the pit. What is not seen most of the time is how punk has brought so many individuals together is a positive way. Punk’s for Autism shows this. It shows the humanity and beauty that the music and people share together. We are one in the pit and out.

Children are the light to any spectrum of life and Lombardo speaks on how to support a child that may have autism:

“… it feels amazing as a parent … my son, like he’s not in any kind of music or sports activities just due to some of the challenges he faces. So, being able to do something where you know not like i’m like coach or baseball team or or you know, do something like that we’re doing something that he feels an impact, but in a way it feels great just that that i’m able to support something that obviously, my son and my daughter–both live with and and make a positive out of you know, not that not a it’s not a negative but make it a positive out of. What they have going on in life, you know it’s just like if someone had.

You know i’m, not to say it’s the same but I guess, to make a bad analogy, but like if someone that, as my or someone had whatever and you know, and you can do something that.

It isn’t that that’s okay, and that’s that’s not a bad thing you know, and so it makes me feel good. It makes my wife feel good as well.

And even just the feedback that we get aside from my own kids when individuals who are on the spectrum reach out and are just so happy and have something positive to say it’s just, it’s so enriching really, really it’s really a great feeling and it’s worth it, you know.

Then, the second part of that for someone … whose child or or sibling or or friend or whatever, and you know the person in their life that they may be, a recent to an autism diagnosis and trying to navigate So what does that mean what do I do it’s um I mean I I went through it myself, you know I don’t have I mean.

You know, not that many people like that I was aware of where we’re familiar with had autism so something completely new to me, but just want to stress that you know it may seem daunting, overwhelming, scary, nervous but everything’s going to be okay, it really is.

And you know I just (don’t want you) to support your child not as much they’re your child they’re your, your sibling their your, your loved one and just see them in those loving eyes and know that things are going to be okay. Don’t be ashamed, don’t be scared, don’t be mean, and I know it can be tough, it can be overwhelming, at times, it can be very tiring but just, just don’t give up and think things will be okay, they really will you know … I guess what I’m trying to say is don’t feel that you’re alone, don’t feel that you are.” Said Lombardo

When you play into the notion that we are all synchronized in the life that we live, we have to understand that we all have a starring role and deserve the utmost respect. Understanding is not an accommodation, it is a basic human right. ‘Punks for Autism’ gives all its proceeds to the study and care for autistic children and allows awareness, with creativity and a gentle shoulder to those who need it most.

You can follow Punks for Autism’s social media pages and purchase merchandise at: