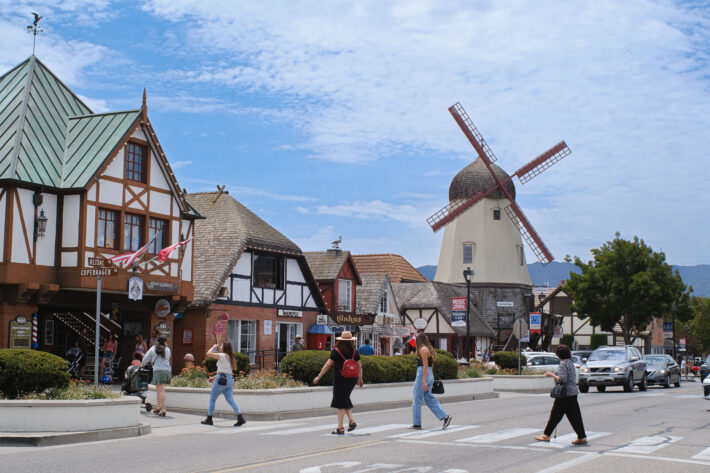 Coming off the 101 highway and onto the 246 East, you will come across a unique city that is quintessential to California culture and history. This part of the Santa Ynez Valley has given much to the homage of the braided and ‘clogged’ of California.

This city is called Solvang; a Danish village that leaves its guests with something you wouldn’t forget. Solvang’s uniqueness brings people from all over the United States and the world to view its magnificent architecture, culture and food to a place that you would least expect.

Upon entering, you see the town’s welcome sign–and on it– you see a mermaid. You may think to yourself, why is there a mermaid? The Danish author, Hans Christian Andersen, a fairy tale writer and was best known for the novel ‘The Little Mermaid’– has established much popularity in this coined Danish town, so much so, that he has had a statue in his honor erected in the village of Solvang by Danish immigrants that inhabited the area. The popularity of the story established him internationally, but Solvang has much more to give than a statue of the Little Mermaid.

Solvang–being a Danish village–offers its guests traditional Danish dishes and pastries that are made in Denmark. One of the most famous places to visit is “Solvang Restaurant,” where they are well known for their Æbleskiver, which is a Dutch jam filled doughnut. Arrive early because the line gets long. If you are just looking for traditional Danish sausages, look no further than the “Copenhagen Sausage Garden.” The restaurant offers 11 types of sausages from all over the world as well as vegan options. If those aren’t for your liking, then direct your stomachs to “Ingeborg’s Danish Chocolates.” For over 60 years, Dutch immigrant Ingeborg Larsen Dutch chocolate’s recipe, has been bringing joy to their patrons in Solvang.
If you are looking for some Nordic items that you can’t find elsewhere, “Rasmussen’s” would probably be your safe bet when it comes to getting things from that area. They have items ranging from jewelry to Christmas decorations.

Speaking of Christmastime, Solvang turns into a spectacular light show that gives you the feeling as if you are in Santa’s workshop. Christmastime has become such an icon in Solvang that “Lifetime” has even made a Christmas movie there. There is no getting past the gingerbread house feel accompanied with guarding life-size ‘Babe’s in Toyland’ toy soldiers.

But let’s not forget about the surrounding area in Solvang. This side of the Santa Ynez Valley is also known for its wineries and restaurants such as “Andersen’s” which has created the nickname of the town of Buellton, “The Home of Split Pea Soup.” If you are heading towards Solvang from the 101 highway, then you’ll see on the right side ‘Ostrichland USA.’ It’s a ranch where ostriches roam freely, and tourists can purchase the rare fair of an ostrich egg. Bon appetit!