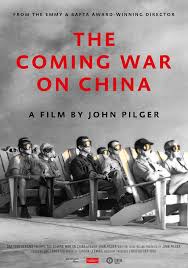 The Coming War on China (2017) a documentary by John Pilger

An Idiosyncratic Review by MHKqu

This review can be divided largely into two halves: The historic approach, with which I am modestly familiar, and the strategic appraisal of the situation, which may be taken with a pinch of Chinese salt – Caveat Emptor.

A participant in the documentary, Eric Li – a social scientist by training, and an entrepreneur by trade – uttered what has so often been repeated by others (including Pakistani politician of both Majority and Minority benches) that (PR) China shalt not resort to attack its neighbors, since China once built the Great Wall “to keep the barbarians out” not to attack them.

While it is pointless to say that why ancient barbarians wanted to attack China in the second place, or that “an inability to adopt to another culture [is] the height of barbarianism” (48 Laws of Power, p. 180) – something the Chinese are too proud to notice anyways – but I wonder at the collective amnesia, not of distant past as one might expect, rather of 20th Century Fox movies like 1962: A Betrayal Story, or Blake Edwards’ What’s in ’Nam (When it is Attacked by Friends and Foes alike?). But when trillions are in deposits, miracles do happen.

Mr Li is perhaps too young to remember the Cultural Revolution under Chairman Mao to have claimed that Communism does not seek converts. While what is being done by Beijing in Sinkiang today is suppressed within PR China, hence Mr Li would not be acquainted with the ground realities. To refresh our memories, then, here is a brief documentary from Aljazeera about Sinkiang:-

Furthermore, his contention that in USA, parties may change but policies do not, while in PR China, Party remain the same, though policies may change, might be true, however, I’d like to know from Trojan Horse’s own mouth, whether by policy change he did not mean Beijing’s decision to go diametrically opposite to building Great Walls around itself by taking the Belt and Road Initiative, thus venturing into the lands of the Barbarians.

Barbarians, who are more than happy in making acquaintance of the refined Chinese culture, which is showering gifts upon them. Little they see the long nails beneath the polish or know what Duke Wus of Chêng are capable to do even to their in-laws – the “sister state” of Hu. (ibid. p. 92.)

In textbook examples, it has been stated of the British House of Commons that it has the power to pass the law to have killed all blue-eyed children. Well, the PR Chinese equivalent of the UK Parliament is actually doing just that: killing Uighur fetuses. Uighurs, who give birth to more than one child, are punished, since another participant, Prof. Zhang Weiwei has this on offer: “If you violate constitution, violate law, you shall be punished.”

To Prof. Zhang Weiwei, it could be granted that since Communism foremost concerns itself with matters economic, and that since Gorbachev, from a Realist point of view, failed miserably in the domain of National Interest as defined so often in terms of securing a state’s integrity, Deng Xiaoping was indeed correct in making the decision of economic reform first.

My counterargument – somewhat anachronistic – however, is that why instead of becoming a more open society, now that the PR China is so firmly poised on world stage both economically and strategically, Beijing renegades even on its assurances of autonomy to Hong Kong.

Why, I’d like to ask with the maker of documentary, Beijing is so afraid of criticism and dissenting voices. The Professor pivoted the question by demanding answers from Noble Prize Committee. (This question and the showcasing of the horrors faced by people of Marshall Islands at the hands of the USA were among the only important things contained in the documentary.)

The documentary ends with its maker urging ordinary people including Mainland Chinese to speak up. Words and language distinguish us from animals, I add as if to answer my own question.

And since we are, it appears, nostalgic about only the distant past, let’s first refer to Sun Tzu’s saying in regards to soldiers who disobey orders, before pointing fingers at the US for silently court-marshaling one of their own working at the Okinawa Base in Japan:-

With the Army Focused,

The brave will not

Nor will the fearful

Du Mu comments how Master Wu had had beheaded a man who advanced on the enemy position prior to orders for attack. This, despite the fact that the man in question had acquitted himself well by beheading two enemies.

Zhang Yu adds: “As the saying goes, those who advance against orders and those who retreat against orders are equally to blame.” (The Art of War with Commentary, Penguin 2009:206. I doubt the makers of the documentary had read this masterpiece. Another scenario could be that the documentary is simply a propaganda tool, but I’d rather err on the side of caution than to make unfounded accusations.)

Another most horrific event that occurred at the US base of Okinawa was that one of US fighter plane fell upon the local population. From the documentary, the premise that I surmised is simply that had there been no American base in Okinawa that accident would have been avoided. But since we are applying historic razor to everything, and the older the golder, it would be far better that Wright Bros. had not acted upon Da Vinci’s paper planes.

However, this logical conclusion would be stepping upon the tail of Huawei, which had proudly tweeted (2020.04.21) the blessings of tech innovation.* Please also bear in mind that a civilian Pakistan International Airline operated aeroplane can and does fall upon Pakistani population.

Bases intimidate, of course, and remain a violation of sovereignty, even if the government of the forum state approves of them. The claim, however, of one of participants of the documentary that Germany and Japan do not have independent foreign policies due to existence of American bases on their soil is not necessarily true. Japan had to openly side with the Arab states during 1970s, in order to procure oil, while Germany declined to become a part of the coalition against Gaddafi’s Libya. More recently (June 2020), the Japanese Defense Minister took his nation out of a missile defense system agreement with the USA, citing exuberant costs entailed by such endeavors.

Moreover, PR China would have been more than happy to cultivate a boogieman, (if US bases were not encircling it, that is,) in order to continue its internal policies, with majority of Mainland Chinese thus rallying behind Beijing’s decisions. In fact Mao had once reportedly told a Japanese visitor attempting to apologize for WW2 atrocities:-

Should I not thank you instead? Without a worthy opponent, a man or group cannot grow stronger. (48 Laws of Power, p. 14)

Lastly, the makers of the documentary saw through the ruse, as it were, of the US Pivot to East Asia. That Obama Administration’s only goal was securing military ties with the Asia Pacific region, with the economic incentives like Trans-Pacific Partnership (TPP) merely served as eyewash. Pres Trump’s backing out of TPP unilaterally, then, was always part of the plan.

Reality is that security ties goes hand-in-hand with economic co-operation. End of TPP, at the very least, jeopardizes Pivot to East Asia, if it has not completely ruined it. (See also: Clinton, Hillary Rodham, 11 October 2011. “America’s Pacific Century”. U.S. Department of State through Foreign Policy Magazine, via Wikipedia, “Pivot to East Asia”, Accessed, 2020.06.29)

If – or per the title of the documentary when – the US decides to attack PR China, it would be at a disadvantage because:-

a. While the PR China patiently awaits, the US prematurely attacks. “[Y]ou must play on people’s natural tendency to react angrily when poked and baited. In the long run, the ability to make others come to you is a weapon far more powerful than any tool of aggression.” (48 Laws of Power, p. 65; see also Kissinger, World Order, p. 215 for 5 baits enlisted by an ancient Chinese Minister.*)

b. Some of the readers might well know that half of the fuel is used by a vehicle to overcome wind resistance. Similarly, most of the energy of US forces would be spent in relocation of troops, ration, ammunition and equipment. Thus all these scattered military bases, which helped launch attacks on a long list of nations as enumerated in the documentary, violates the basic strategic norm of Mass. (Note also that PR China is a far more formidable adversary than any faced by the US since the end of WW2.)

… Drunk with success and sick with ambition, … empires expand to grotesque proportions, and meet a ruin that is total. … For the Chinese, the fate of the kingdom of Wu serves as an elemental lesson on what happens when you dissipate your forces on several fronts …. “If you are not in danger,” says Sun-tzu, “do not fight.” (48 Laws of Power, p. 172.*)

c. Morale of US armed services stationed in far flung military bases would be, in all probability, far below that of People’s Liberation Army. Furthermore, while PR China can bank upon the support of a vast majority of its more than 1 billion citizens, the US is marred internally by petty squabbles between the two leading political parties, as well as divisions among the various racial groups.

d. PR China might forcibly lay claims to islands in South China Sea, even to the sea itself, in the court of World Opinion, however, the US would be seen as the aggressor, and this time around, the US would face the music from a sustained counter Public Relations campaign, unlike a speechless Saddam Hussein or the rudimentary media skills of Afghan Taliban.

e. Lastly, anything short of regime change in Mainland China, regardless of how bravely, how superior its forces might fight, the US would be considered as defeated.

The only blunder PR China can commit, then, is to attack Taiwan (the Republic of China). The Chinese has a tendency of crushing their enemies completely (refer to Law 15 of 48 Laws of Power), and Beijing, more than anyone else, knows its illegitimacy in the face of an old Chinese saying: as long as the old government retains so much as a very small tract under its control, it is still the de jure government. If it can control on this impulse, Beijing can claim victory – like Gen. Chuko Liang (ibid. p. 38) – without a single shot fired.

* Please refer also to sections ‘The Rise and Fall of Each Empire’ and ‘Compare and Contrast’ of my On World Order, and Appendix I, thereof.