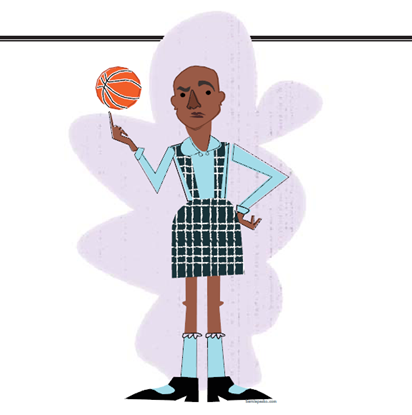 As the old adage goes, you can’t make everyone happy all the time. Well, in the world of professional sports, no one’s ever happy.

Barry Bonds hates the media. He thinks they pick on him. Well, that’s what happens when you act like a punk.

Now, PGA golfer Jean Van de Velde plans to infiltrate the 2006 LPGA British Open. He’s freaked because the regular event plans to open its doors to women. Therefore, he thinks it’s fair to take a crack at the ladies.

“I’ll shave my legs and wear a kilt if I have to,” the Frenchmen said.

Now ESPN can include a red carpet segment on their new show, “ESPN HOLLYWOOD.”

Shortly after Stern announced his decision, the sky came crashing down. High school drama in the NBA. Players were bitching and moaning as if they‘d been issued plaid skirts. Even the normally mild-mannered Tim Duncan of the San Antonio Spurs started popping off to his principal…I mean, commissioner.

“I think it’s a load of crap,” said Duncan in recent papers. “I understand what they’re trying to do with the hats and do-rags and jerseys and stuff. That’s fine. But I don’t understand why they would take it to this level. I think it’s basically retarded.”

Okay, Duncan has a point. The dress code is retarded, but take warning. Anyone who breaks it is subject to a steep fine. A penalty many were ready to wear (pun intended).

However, best not mess around, Tim. Stern’s got the power, it seems. His main objective is to make the owners rich and appease advertisers. One way he can do that is by taxing your ass. Still, it’s unlikely that Stern will morph into Filimore Slim anytime soon. In fact, Stern has been quoted as saying he’s “confident that (the dress code) will be complied with.

So far he’s been right.

True, Dwayne Wade and a few others bent the rules earlier this season, but no biggie. Their new look wasn’t too far off the standard. That’s probably why none of them received fines.

The Indiana Pacers Stephen Jackson wore his jewelry in defiance of the code for a few games. His defiance was not in the name of fashion, but an anti racist protest.

Jackson stated, “I think it’s a racist statement because a lot of the guys wearing the chains are my age and are black.” Jackson’s protest ended shortly after the start of the season. Jackson said,” I love my jewelry. But I love playing basketball.”

Although the dress code does eliminate many items of clothing black athletes consider part of their heritage, it’s ridiculous to assume David Stern originally planned to attack black culture. If anything, Stern is old school and far from hip…or hip-hop. Maybe that’s why he’s been willing to overlook a few minor infractions.

When my old high school, Long Beach Wilson, passed a rule that forced students to tuck their shirts into their pants, no one complied. Two years later, the entire school was in uniforms -white and khaki. It was ugly.

Learn from the story of Wilson High Schools, boys. Stern sets the fashion trends in the NBA. He’s got the power to dress you up in blouses, if he wants. You’re all his children. Treat the mother of the NBA with some respect and he’ll bend over backwards.

Push his buttons and you might see Joan Rivers sitting courtside.